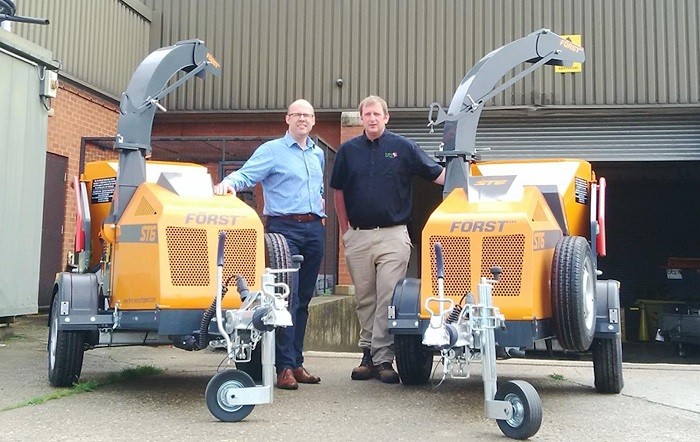 bts Group, one of the leading utility arboricultural companies in the UK, has signed its first major contract with high performance wood chipper supplier Fí¶rst.

bts is expanding its machinery fleet after winning a new three-and-a-half year contract to cut trees in Lincolnshire.  The company, which provides vegetation management services to electricity distribution network operators (DNOs), is enjoying growth based on its commitment to delivering excellence and giving value to its customers.

The new deal with Fí¶rst sees bts Group add 12 new wood chippers, including the Fí¶rst ST6 and TR6, to its fleet.  These new chippers mean bts can both expand its fleet and replace a number of ageing machines.

The contract with Fí¶rst is a first for bts, having previously operated a fleet of competitor machines.  Following trials on a number of key wood chipper brands and their solutions, bts specified Fí¶rst's products. The decision was based on a number of key factors including robustness and the outstanding chipping performance of the machines.

The utility industry is dynamic and fast-paced.  For utility arboricultural businesses, success depends on being efficient and effective.  Tim Berry, Senior Project Manager at bts Group, said: "It's vital that the machines we use never let us down, can be maintained easily and perform to the highest standards.  It's testament to the quality of Fí¶rst's products that we have no issues with the machines to date, and it's good to know engineers are on hand if we need them."

A key factor in bts's decision to select Fí¶rst was the promise of first class support.
Fí¶rst's range of 6" and 8" wheeled, tracked and PTO wood chippers are backed with a three year warranty as standard.  To provide complete peace of mind, products are supported in the field by Fí¶rst's own team of field service engineers.

At first, the fact that Fí¶rst chippers are heavier than 750kg presented an issue. A number of bts's staff didn't have a licence to tow trailers more than 750kg in weight.

bts's Tim Berry said: "Fí¶rst went the extra mile in the tender process by including  funding for training and tests in the contract.  It went down superbly with the team and also means we now have an upskilled workforce."

An electric option from Raymo

More than ever before contractors are being asked to meet higher...
...Read More

Following growing concern in the industry around mental health in...
...Read More