CLAAS on course at the home of golf 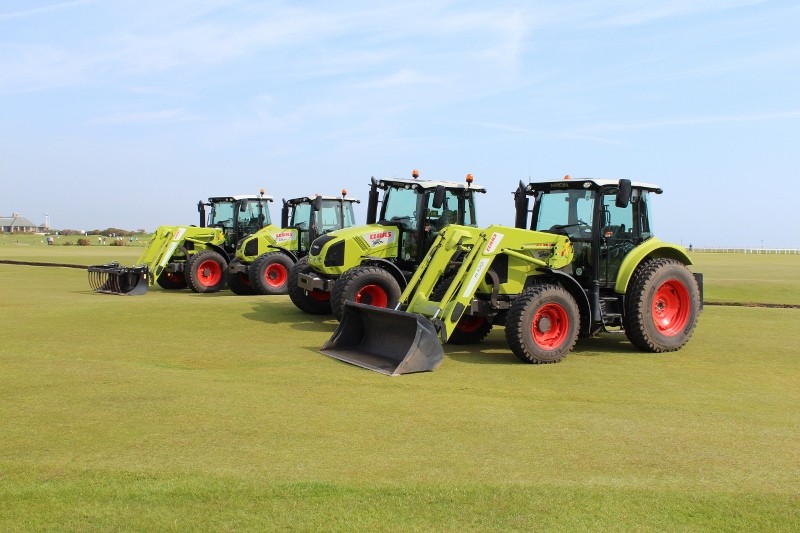 The St Andrews Links Trust has invested in four new CLAAS tractors for use across the seven links courses it runs at the world famous "˜home of golf', St Andrews.

The four tractors, a 100hp ARION 410 with an FL100 loader, two 110hp ARION 420s and a 145hp ARION 530, which is also equipped with an FL120 loader, have been bought by the St Andrews Links Trust to provide extra productivity over the seven courses managed by the trust, which cover almost 400ha.

In addition to hosting some of the most famous competitions and golfers in the world, between them the seven St Andrews courses see around 250,000 rounds of golf being played each year, with the famous Old Course being the busiest with up to 45,000 rounds played in a peak year after a competition such as the Open.

It is to better meet the challenge of working around this high level of players whilst maintaining the high standards they expect, that the Trust has invested in the four high powered tractors.

The tractors were supplied by local CLAAS dealer Sellars and have been specified with either soft radial turf tyres or Nokian industrial tyres on the loader tractors. The three smaller ARION 410 and 420 tractors are designed to be compact and extremely manoeuvrable, and feature a 4-cylinder DPS engine driving through a 16 x 16 QUADRISHIFT transmission with four electrohydraulic ranges, each with four powershift splits, and a clutchless reverser.

The larger ARION 530, which was specified with a 2.2 tonne capacity FL120 loader has been bought specifically for heavier handling work. This again is powered by a 4-cylinder DPS engine with a CLAAS HEXASHIFT transmission, giving six powershift speeds within each of the four electrohydraulic ranges, operated at the flick of a switch using the DRIVESTICK control mounted in main armrest console. The ARION 530 also features the market leading CLAAS full cab suspension system for optimum driver comfort when on the road or rough ground.

One of the ARION 400s has also been specified with a creeper transmission and four spool valves, so that it can be used on a drainage machine.

"My policy is to replace the tractors every 10 years," explains Workshop Manager Willie Redpath. "Of the three leading makes we looked at, even though it was slightly more expensive, I felt that the CLAAS was more user-friendly and the right tractor for the job. CLAAS has taken a good product and made it even better. We initially had just one to assess its suitability and found it was easy to drive, comfortable, and offered a good specification whilst still being simple and straightforward."

Whilst two of the new ARIONs will be mainly based on the Old Course, which is managed by Gordon McKie and the other two allocated to Kevin Muir who manages the Eden and Strathtyrum courses, where necessary the tractors can be used across all the courses and also for handling and cultivation work on the nearby 8ha turf farm.

"The main thing is the productivity that a tractor this size enables us to achieve. Basically we are looking for the greatest productivity in the least amount of time," says Willie. "Apart from being able to operate wider and larger course maintenance machinery, we are also doing more work and tackling larger renovation jobs in-house, so the tractors make moving equipment, such as our excavator, around between the courses far easier."

Between them, up to 39 greens staff are employed at peak times on the Old Course and Strathtyrum courses, and with all of them likely to need to drive the tractors, safety and ease of use are important.

"The cabs are spacious and the controls are all in the right place, everything comes to hand and they feel comfortable," adds Kevin Muir. "There are also some nice touches, such as the push-back pick-up hitch. The all-round visibility is good and the tractors are well balanced with a good power to weight ratio so that they are on top of the job, which is important for safety."