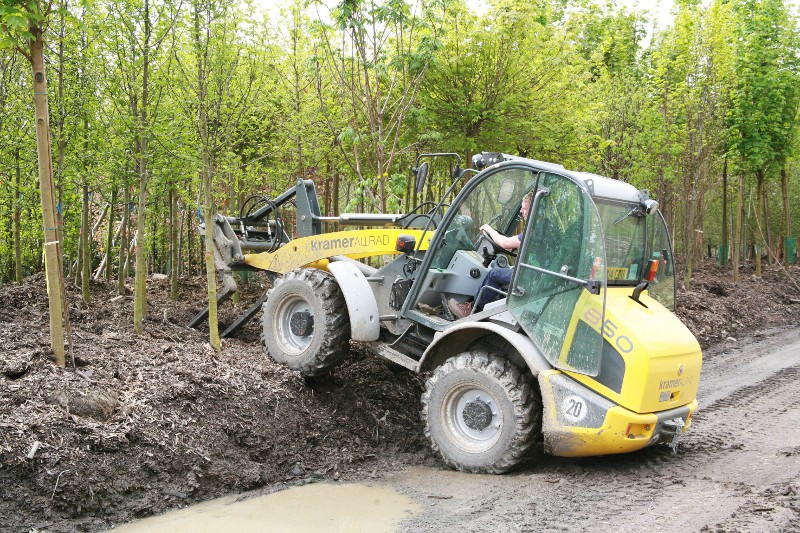 Dingle Nurseries, based near Welshpool in Powys, is one of the largest of its type in the UK and has recently taken delivery of yet another pair of Kramer wheeled loaders following two previous pairs of similar machines used by the nursery over the past 12 years.

The family business, which traces its history back to 1968, has grown from one to 350 acres over the years and now boasts both retail and wholesale divisions. In recent years the nursery has become highly dependant on its Kramer machines, so much so that family member Dafydd Joseph said: "I'd have four if I could afford them!"

The Kramer 850 models chosen have been supplied by local dealer Beddoes Compact Plant Sales and are now in constant use, six days per week from 7am to 6pm undertaking a wide range of jobs from unloading delivery vehicles to extracting individual root-balled trees from bark chipping beds. With a quick switch from pallet forks to a bucket, they are also used for handling compost and other general clean-up duties.

According to Mr. Joseph, the key feature of the Kramer design for his application is the rigid frame layout combined with 4-wheel drive and 4-wheel steer systems which provide outstanding stability and cross-country ability. He also likes the quiet running Deutz engines and excellent all-round visibility from the cabs which ensure smooth and safe operation in the busy dispatch area