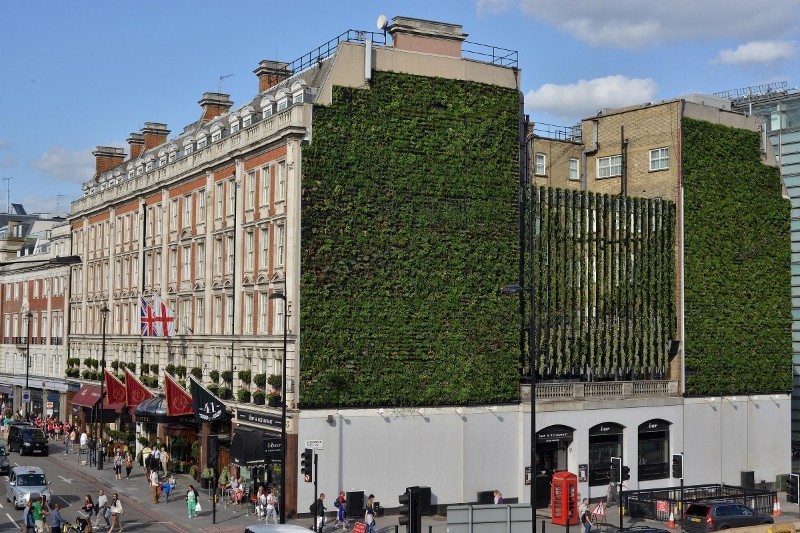 Urban greening specialist Treebox has unveiled one of the most striking and wildlife-friendly pieces of city centre greenery in the UK with the launch of its living wall at The Rubens at The Palace hotel.

The 350 sq m living wall on the side of the four star hotel in Buckingham Palace Road has been specially designed to  help wildlife – particularly pollinators – flourish in London, and is a striking symbol of the wider regeneration of Victoria.

Buttercups, crocuses and strawberries have been used to attract butterflies and bees, while asplenium and ferns will give a year-round lime green colour to the wall. Other plants have been chosen to provide seasonal colour. In total, it features 10,000 herbaceous plants and ferns.

As well as a boost to Victoria's biodiversity, the living wall will help improve air quality around Victoria. The herbaceous plants and other vegetation of which the living wall is composed absorb microscopic pollutants known as particulate matter (PM10s). High levels of PM10s have been shown to cause respiratory illnesses that can result in death.

The wall also includes a number of special features, including irrigation tanks to store rainwater harvested from the roofs. In a world's first, the wall will also be programmed to respond to heavy rain by slowly pumping water through the wall and increasing storage capacity of the rainwater tanks, taking the pressure of the drains and thereby helping to reduce the risk of surface water flooding in the neighbourhood.

Armando Raish, managing director of Treebox, said: ""Due to the variety of plants used in its construction, we expect the living wall at The Rubens to significantly increase the number and variety of bugs and bees in this part of Victoria, helping to promote biodiversity and return nature to this urban environment."

Jonathan Raggett, Managing Director of Red Carnation Hotels, of which the Rubens at the Palace is a part, said: "We're excited to be unveiling the living wall on the side of the Rubens at the Palace. We take the issue of sustainable tourism very seriously across the entire Red Carnation Hotel collection, and this wall will minimise the hotel's impact on the environment but also improve the air quality and aesthetic in this part of London."

A recent survey on the impacts of ash dieback found nearly a...
...Read More

LAPU is an official media partner for SALTEX 2022

Landscape & Amenity Product Update is delighted to have been...
...Read More