Farmtrac is helping usher in a greener, more sustainable future for tractors with its FT25G model.

After a successful outing at the previous Fully Charged LIVE Show in 2021 – hosted by the Fully Charged Show team and founder Robert LLewellyn – Farmtrac will once again be showcasing the revolutionary all-electric FT25G tractor.

Steven Haynes, tractor sales manager at Farmtrac, says: “We’re really excited to be back. The response we had at last year’s show was fantastic – people are really eager to see new innovations in the electric vehicle industry, and the FT25G is the first of its kind. 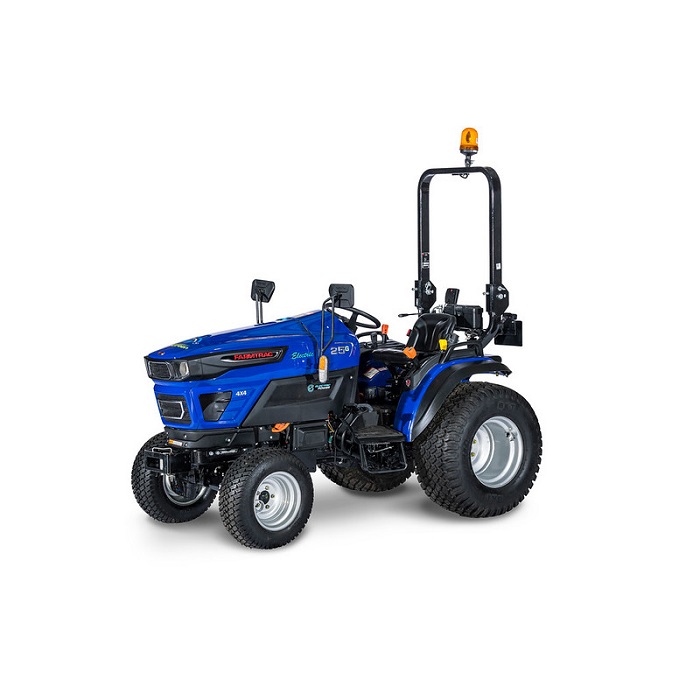 “We return this year with a real emphasis on both the sustainability and viability of the electric tractor in a commercial setting. We’re also pleased to be introducing the FT25G HST model to the show, which uses hydrostatic transmission for an even more dynamic and versatile performance.

“We’re all aware that there has been a sharp increase in fuel prices these past 12 months and we are mindful of the impact this has had on both the agricultural and groundskeeping industries,” Steven continues. “We believe that bringing in alternatives like the FT25G and FT25G HST – models that can simultaneously lower carbon footprint, keep running costs down and work efficiently – will be a long-term game changer for both these industries.”

Introducing an efficient all-electric tractor to the commercial market has already caused quite a stir in the media, with the tractor featuring on BBC Countryfile and the Fully Charged Show itself. The FT25G was put through a series of tests around the farm to evaluate its performance and both Fully Charged TV show host and show founder, Robert Llewellyn, and farmer Adam Henson, were highly impressed with its power, battery life, and quiet running noise.

The innovative FT25G is renowned for its ease of use; it features a 72V lithium-ion battery and onboard charger, which can be charged from any domestic socket to reach 100 percent in only eight hours. It is an excellent all-rounder that can cope easily with six to seven hours of demanding work. Quiet and efficient, the FT25G is a powerful compact tractor which will help farmers, paddock-owners and groundskeepers alike to greatly reduce their carbon footprint without compromising on productivity.

The FT25G is even suitable outside a commercial setting: its compact size and ease of use make it an ideal choice for avid gardeners with larger surface areas to cover.

This eco-friendly tractor has more to offer than just its status as all-electric, with complimentary mower attachments and optional tyre configurations available to suit different types of work – there is, for instance, a turf-friendly configuration that will prevent damage to grass areas.

For an even more dynamic EV experience, the new FT25G HST is unbeatable. It has all the fantastic attributes of its predecessor, with the added bonuses of a higher transmission. Particularly notable to commercial users is the increase in power-to-weight ratio, which will allow for more choice in attachments. The FT25G HST elevates the level and versatility of an already fantastic all-rounder.

Reesink Agriculture and Farmtrac are pleased to be showcasing this industry-leading zero-emission model at the Fully Charged LIVE Show from April 19th to May 1st at Farnborough International.

Head down to the exhibitions on show at Fully Charged LIVE, and make sure to stop at stand number E10 to see the revolutionary FT25G and the FT25G HST – we know the atmosphere is going to be electric!

On Stand CE16 at the Hillhead 2022 Exhibition in Hillhead Quarry...
...Read More