Rotherham on the way up with a pitch to match 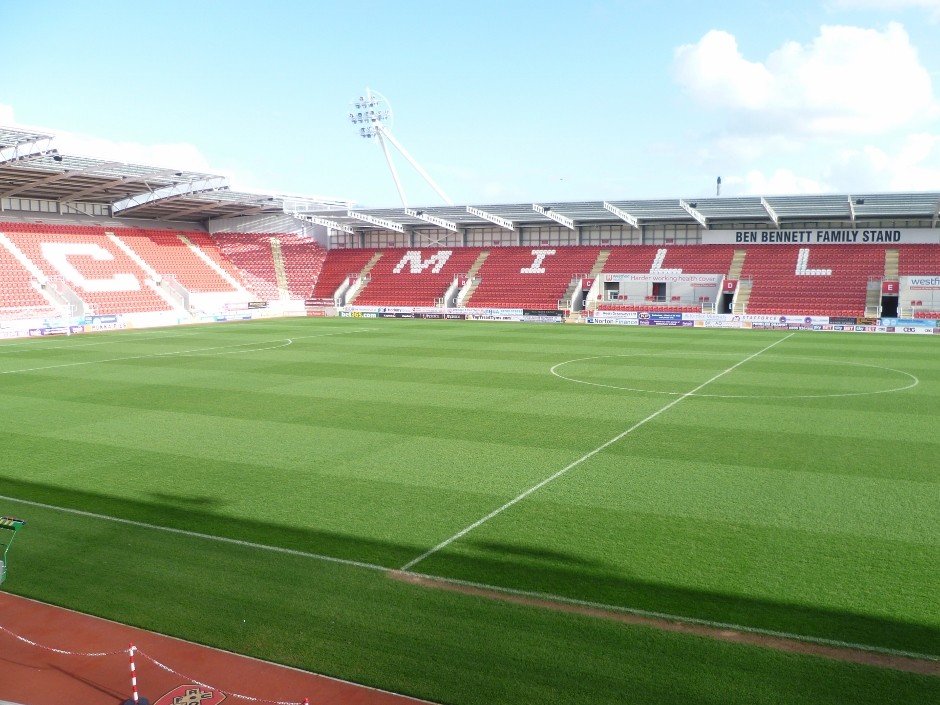 Rotherham United Football Club - The Millers - were promoted last season from League Two and pushing for promotion to the Championship this year.

Dave Fellowes, Playing Facilities Manager has been at the club for two and a half years. Through previous stadium development projects as Head
Groundsman at Fulham Football Club he was ready to take his role in the construction of the new stadium.

"Moving into the new stadium was a massive job," Dave recalls, "I enjoyed being part of it, making sure the pitch was constructed in a way that I wanted.  It was a good experience but one I'm not sure I'd really want to go through again in a hurry - although if I did I'd feel better prepared to deal with the many problems that ultimately occur."

The pitch is a fibre-sand construction with a gravel carpet drainage system that has worked well, even with the weather conditions the first part of 2014 has thrown at them.

Because Dave had used Johnsons Sports Seed Mixtures in the past, and has always been happy with the results, the breeder was chosen for the new pitch.
He believes in using the STRI seed book as it allows comparison of all the best rated cultivars on the market and goes by the top ratings for his selection.

He overseeded in early October 2013 with J Rescue because he wanted to get it established whilst there were still good soil temperatures and good sunlight (not lots of shade).  In the past he had overseeded late but found that once temperatures dropped it didn't come through.  However, his plan worked as the plants came through strong and sustained within 5-6 days, helped by the existing grass cover that give the seedlings some protection.  Not only rapid establishment but good winter colour too. The spring-back and recovery of it was excellent.

Rotherham had nine fixtures throughout November and they were able to play on the pitch that quickly. Dave says that if he hadn't overseeded when he did, he wouldn't have had a pitch left coming into the winter season. The players have been more than happy with the surface.

Dave again, "The Chairman of the club takes a keen interest in the pitch and doesn't want a poor playing surface. To that end I'll be looking to dig the pitch up again at the end of the 2014 season; put some new material in and then overseed from scratch with Johnsons J Premier Pitch. I'm really happy with the results Johnsons Sports Seed give us – colour and playability – and for a market leader it is very reasonably priced."

The new formulation of J Premier Pitch for 2014 includes the new cultivar Chardin, a new DLF cultivar with exceptional wear tolerance and a high shoot density. The introduction of Chardin in combination with the already proven cultivars in the mix delivers a mean STRI live ground cover rating under wear of 7.85 making it the highest rated and hardest wearing mixture available in the UK.