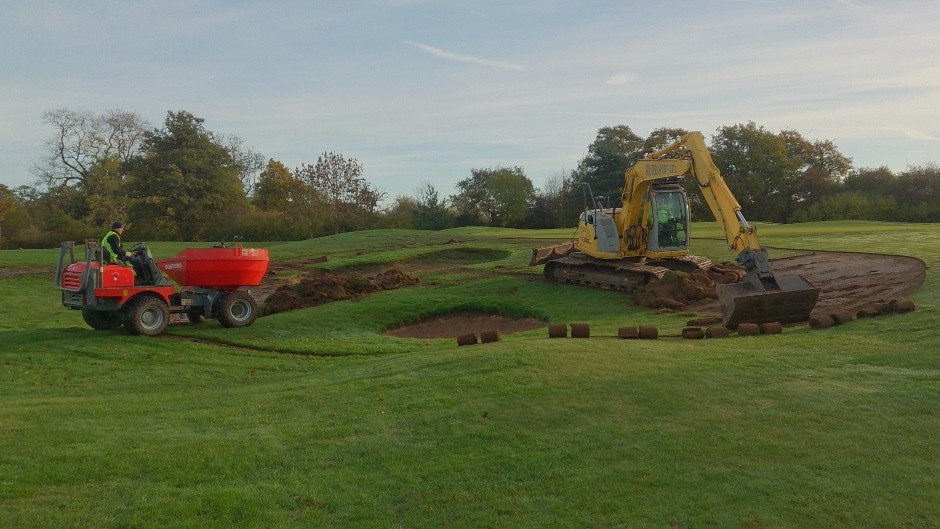 The Carden Park Golf Resort boasts not one, but two championship golf courses, the Cheshire and the Nicklaus; with the latter being a previous project for Souters Sports when they successfully completed major drainage work. It was this impressive work which led course manager Peter Pattenden to place his trust in the company once again for the bunker rejuvenation on the Cheshire course.

The Cheshire, built 24 years ago with bunkers in revetted style had shown the telling effects of sand-trap erosion and with the Nicklaus course receiving significant investment over recent years, it was imperative that the Cheshire was not left in its shadow.

Leading the Cheshire project was Souters Sports' bunker shaper Rab Tait, who engineered the lifting and replacing of nearly 8,000 metres of turf for facing and surrounds, and the installation of 1100 tons of fresh Bunkerites sand. A 13-ton excavator with swivel bucket and two turf-tyred dumpers handled the earthworks and transportation.

However, as the project unfolded it became apparent that many of the bunkers had no drainage at all, so for Souters it became a drainage project too. To solve the problem, Rab and his team installed 80mm of piping where necessary to see that the freshly shaped bunkers would drain efficiently.
"We knew many of the bunkers were poorly drained and actually had no idea whether there was anything in place. It was a voyage of discovery, you might say. Much of what was there was either blocked or had collapsed, we discovered," said Peter.

Peter and Rab planned and made decisions about re-developing bunker set-ups hole-by-hole. This was governed very much by what the topography would allow along with weather conditions. Much of the work involved bringing noses in and taking noses out where appropriate or moving bunkers left or right slightly to influence play.
With a series of high profile clients, the Souters Sports team has completed a number of services to golf courses throughout the UK including renovation and maintenance, irrigation, reservoirs and water harvesting and primary and secondary drainage installations - to name but a few.

The company also adheres to a best-of-the-best recruitment policy, in which they have patiently spent a number of years assembling a group of proven, enthusiastic and talented professionals, trained in all facets of golf course construction, which has been reflected in their work; and Peter is yet another satisfied customer.

"The project has been a huge success with great feedback from the members. It's a joy not to have standing water in the bunkers any more, and know that they all offer a high level of consistent playing quality. They look amazing too."