With the financial disparity between football’s elite and the sport’s grassroots levels continuing to widen, non-league clubs such as Cirencester Town FC, are constantly searching for new ways to make themselves sustainable.

For the EVO-STIK League South club, this meant exploring the benefits of the latest technology for their new pitch – from top to bottom.

The club’s motto, “Providing football for all”, had seen it pioneer the concept of the youth academy some 25 years ago, as well as forge close links with nearby Cirencester College. Since then however, the limitations of its facilities had left it with no option but to turn promising young players away to Swindon, Cheltenham, or Gloucester.

In the club’s bid to become more financially and environmentally sustainable, its chairman, Steve Abbley, identified the potential for an artificial grass pitch to reduce the impact of poor weather on fixtures and training schedules, while simultaneously creating a new revenue stream through hiring the pitch out to local third-parties. 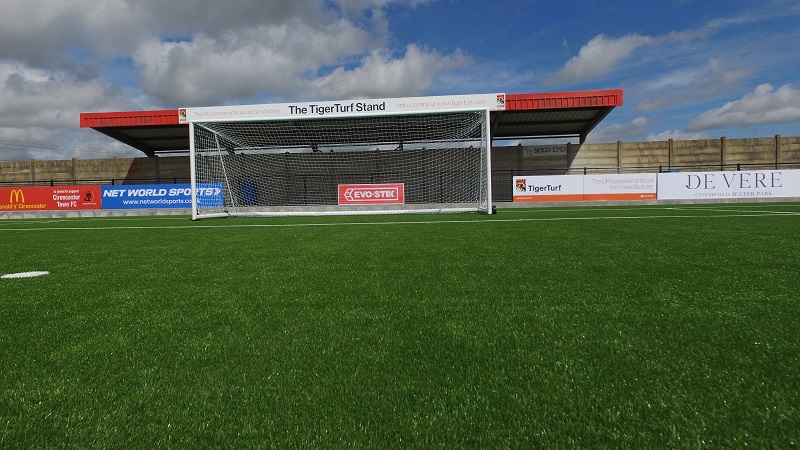 The Centurions embarked on a fundraising mission which saw them successfully apply for a grant through The Premier League & The FA Facilities Fund. Having also secured sponsorship from the club’s chairman, one of its key local sponsors, and Cirencester College over a two-year period, Cirencester Town FC soon had the funding – and the local interest – to invest in a new, full-sized 3G pitch.

Scott Griffin, Football Secretary at Cirencester Town FC, commented: “As part of our planning process and funding application, we needed to forecast the number of hours the new pitch would be used for each week, as well as demonstrate that we could support the investment with a viable business model. Having also sourced expressions of interest from local clubs and organisations, we realised we could accommodate a staggering amount more usage per week, compared to the four hours we could allow on the natural grass pitch. This in turn helped us to prove that a new 3G pitch wouldn’t just benefit the football club, but would be a huge asset to the local community as a whole.”

Under the Football Foundation’s Framework Agreement for artificial grass pitches, McArdle Sport Tec – the UK's leading artificial sports surface installers – was appointed to carry out the installation, and opted for TigerTurf’s Premier Pro 60 surface. Having been specifically designed to comply with the very latest FIFA testing, Premier Pro offers unrivalled levels of durability, resistance, safety and performance, making it the ideal choice for clubs looking benefit from increased playing hours and higher levels of performance and player development.

With sustainability a top priority, the specialist contractor also specified PRO-gran, a new type of infill designed by Murfitts Industries to offer optimum performance and long-term safety assurance. As an increasing number of facility managers look to ensure the wellbeing of users, the polymeric infill is engineered to offer the very best in performance and is safe for players and the environment. The material combines the exceptional dynamic properties of rubber which is then coated in polyurethane to make it 100% safe. Not only does this produce a denser material with a range of playing benefits – from more consistent ball bounce to lower operating temperatures – but it also ensures the whole pitch will conform to the exacting safety regulations set by EU organisation, REACH.

Artificial pitches with PRO-gran are more visually attractive than with any other infill. It comes in a choice of green or brown and will look vivid, colourful and clean for many years to come – especially on television. It is UV stable and meets the requirements of FIFA Quality Programme for Football Turf and World Rugby Regulation 22. Every batch is tested to ensure full compliance with industry standards, whilst PRO-gran’s unique coating doesn’t break down and is guaranteed to last in perfect condition for the lifetime of the pitch.

Since its installation, the new pitch has boosted interest in the club’s facilities, attracted more junior players, and even helped the club to increase its sponsorship and advertising revenue. As a result of the extra income generated by the new playing surface, the club’s investment is expected to pay for itself in less than 10 years.

Scott concludes: “Within weeks of the new surface being installed, we’d seen an increase in the number of people enquiring about using our facilities – which even extended to interest in our clubhouse venue as well as the pitch. We have increased the number of junior players from 187 to 297 in just three months and have created eight new youth teams as a result.

“We’re over the moon with how the new pitch looks, and are delighted with the positive impact we’ve been able to make on the local community.”

It isn’t just Grounds Manager Nigel Harvey who has moved from...
...Read More