Spurred on to enter the grounds management industry

Little did Spurs fan Harley Coplen know that his visit to last year’s WorldSkills UK LIVE exhibition would culminate in him winning a tour of the Tottenham Hotspur Stadium and the club’s training ground - and spur thoughts of him and a fellow student entering industry apprenticeships.

Entering the prize draw on the Institute of Groundsmanship (IOG) Young Board’s ‘careers in grounds management’ stand at the Birmingham NEC event in November with tutors and fellow students from the Robert Clack School of Science in Dagenham, Essex, Harley won the trip for him and a group of peers from more than 200 entries. 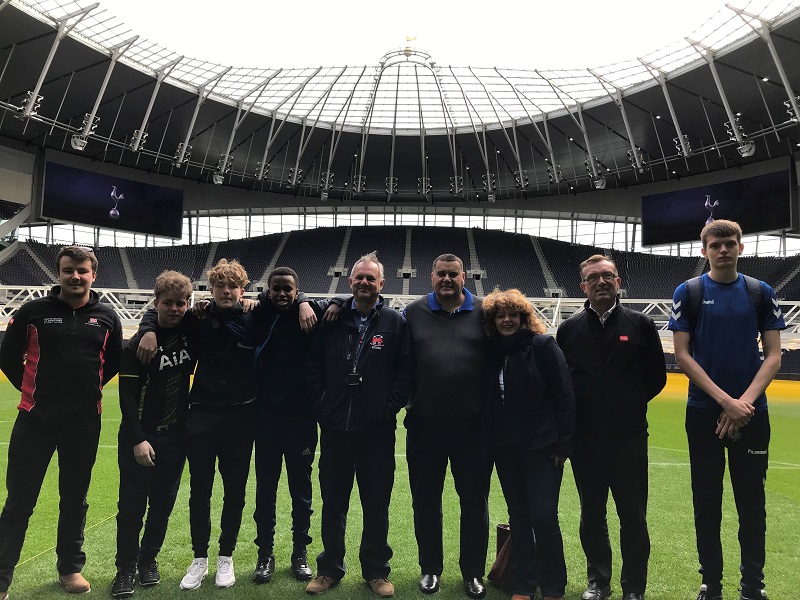 "I am proud to say that I am a Spurs fan,” says Harley, “and the stadium is phenomenal. I was taken aback by just how big it is and especially by how much work goes into the pitch to make it look so good for the spectators and for it to accommodate the players’ needs. I have learned a lot about becoming a groundsman and the hard work involved, and I have decided that I would like to pursue an apprenticeship in the industry.

“I would like to say a massive thank you to the IOG and everyone at the stadium and training ground for the experience, and for ensuring we got the most out of our trip."

Jane Meaden, one of the tutors who accompanied the group, added: "A big thank you to the Spurs grounds staff who gave us an incredible tour and insight into the workings of the training ground and the stadium – where we saw how things worked pitch-side as well as ‘underground’ where the sliding pitch is stored.

“We all had a great time and we now have a couple of future groundsmen in the making. A special thank you to Darren Baldwin, head of playing surfaces and estates at Tottenham Hotspur FC, for making the day so entertaining."

WorldSkills UK LIVE at the NEC is one of a number of events attended by the IOG‘s Young Board to raise awareness of the industry as a career option, highlighting the sector’s inherent science and technology to also aid teachers in contextualising maths and science in the classroom. The Young Board strategy is based on developing promotional material and engaging with young people, guiding them towards a clear pathway into a rewarding career in grounds management. Young Board members give up their own time to organise and support Young IOG initiatives attending and supporting a range of career events through the year.