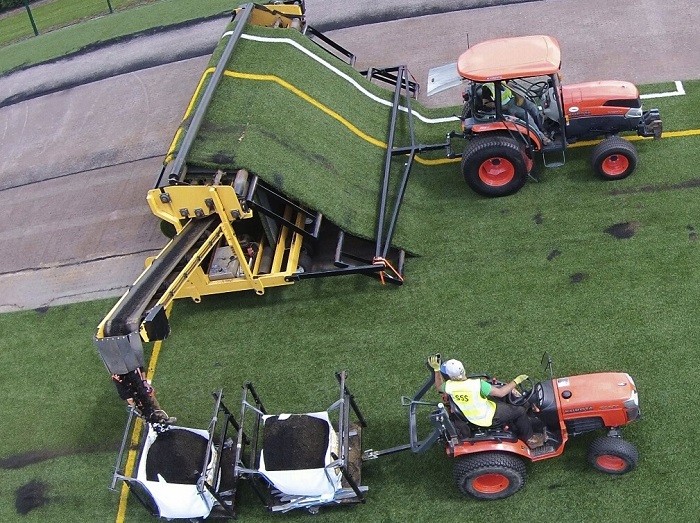 A flood-damaged All Weather Pitch that seemed destined for landfill was rescued thanks to a ground-breaking project – the first of its kind in the UK.

And the high quality of the renovation work was verified by independent testing house Sports Labs.

SMS described the reclamation and reinstallation of the 7,000m2 pitch as a model example of sustainability in action, as important for its low-carbon footprint as it was for its cost savings to the client.

The 3G surface, used for rugby and football, was damaged when the River Tees burst its banks. An early inspection confirmed the carpet had rucked in several places, the sub-base was compromised, and rubber infill had washed away.

Even though it had only been laid a couple of years, the traditional linear model of land-filling the entire system and replacing it with new carried an estimated cost of more than £250,000.

SMS offered the environmental solution. Sales Manager Jason Lewis-Lamb explained: "The course of action recommended by every other contractor was to remove and landfill the entire system.

"In other words, they were advocating the removal of some 345 tonnes of infill and carpet, all of which was in perfectly good order, along with hundreds of tonnes of rubble from the sub-base.

"Bearing in mind that the carpet was only a few years old at this point, this was a huge amount of value to throw away."

SMS implemented the Xtraction process, with the precision cutting, rolling and separation of 320 tonnes of infill, without damaging the existing shock pad.

The company designed a cutting and installation plan that maximised efficiency and preserved the integrity of the pitch.

It then began the process of cutting the seams and, using the Xtraction Turfmuncher TM5, carefully rolled up the carpet and separated out the remaining infill and premix.

The TM5 removed the carpet without damaging the underlying shock pad system, which was also removed and kept for re-use.

Failings in the sub-base were repaired by Hellens Group. SMS then reinstalled the entire carpet system, which was certified by Sports Labs testing to World Rugby standards.

"The monetary saving was impressive, but the real value was in the reuse of materials and the project's sustainability."

While countless schools around the country may already rely upon...
...Read More