A major retail and leisure complex in Northamptonshire has enhanced its sustainability credentials by using crates from ACO Water Management’s StormBrixx geocellular stormwater attenuation and soakaway (infiltration) system to promote extensive tree growth throughout the development.

Trees offer extensive environmental, amenity and attenuation benefits to a development, as not only can they improve air quality and mitigate pollution – as a single mature tree can absorb carbon at a rate of 21.6g a year – but they also possess natural attenuation benefits, with the 200 trees planted at Rushden Lakes predicted to be able to capture over 2.2m litres of rainwater a year. As such, the trees played a vital role in the site’s Sustainable Drainage System (SuDS) strategy. 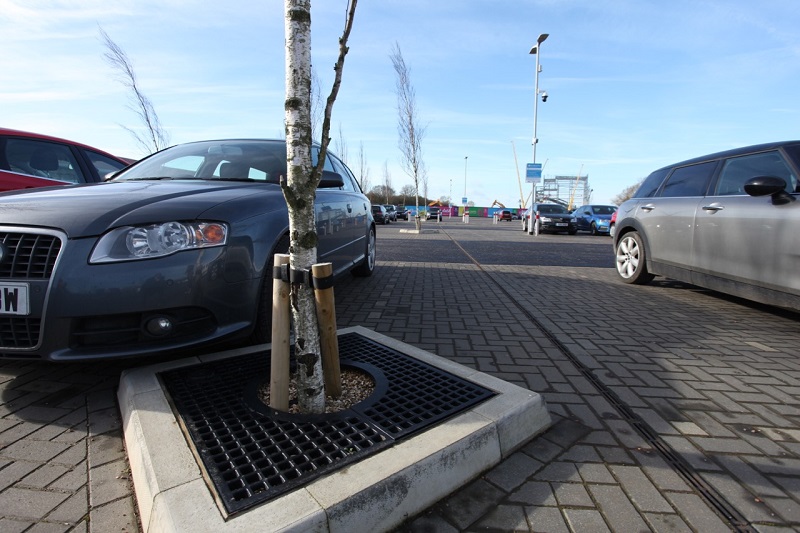 ACO StormBrixx geocellular attenuation and infiltration crates are regularly used as part of SuDS systems to collect and hold stormwater in the event of extreme weather episodes, before slowly releasing the water back into the environment via attenuation. However, in the Rushden Lakes project, they were put to use in a somewhat different way, as UBU – the landscape architects for the project – identified ACO StormBrixx as adaptable for use as tree pits, thanks to the system’s flexible configuration, inherent strength, open cell structure and high porosity.

Mark Johnson from UBU Landscape Architects, commented: “The high void capacity crates were ideal in allowing root growth and were strong enough to protect against load stresses from trafficked areas above. The flexible construction also meant we could put together various designs for different areas of the site.”

The tree pits were located throughout the site, in particular in the hardstanding car park areas, as well as along the central boulevard which runs through the retail area down to the leisure facilities on the waterfront.

Olivier Bouzigues,Technical Product Manager – Storm Water Control, at ACO Water Management, added: “Thanks to its easy snap-lock construction, various tree pit configurations were able to be installed throughout the site. These included a cross design in a car park node where one instalment of StormBrixx protected four trees in one construction, as well as a half-lap concentric ring pattern around some trees, aided by the system’s brick-bonding for extra stability.

“What’s more, given the high volume of earthworks undertaken as part of the site’s construction, filling the StormBrixx tank void with high-quality, clean and fertile soil and then wrapping the structure in geotextiles, prevented the risk of soil contamination and ensured the trees could grow unhindered.”

Looking to the future, the second phase of the Rushden Lakes development is set be completed by early 2019. This will see the existing retail site supplemented by a 14-screen multiplex cinema, as well as further restaurant openings and a leisure complex complete with a trampoline park, climbing centre and adventure golf.

Additional car parking will be included as part of Phase 2, and ACO StormBrixx will continue to be used to accommodate further tree pits throughout the site. ACO’s wider water management expertise will also be called upon, with ACO’s high-capacity Qmax slot drainage system due to be installed throughout the site’s new car park. ACO KerbDrain – a combined kerb drainage system – will also be installed along a new access road, which will link Phase 2 to the wider Rushden Lakes development.