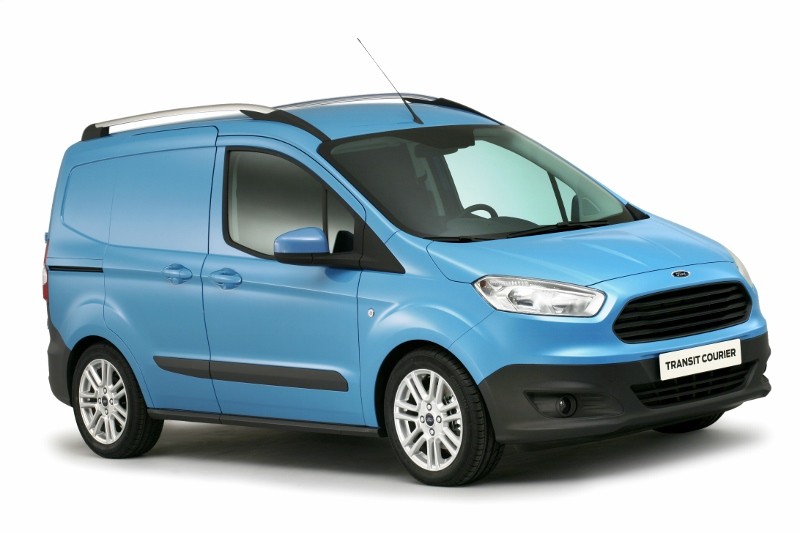 Offering class-leading loadspace, running costs and safety features, the Transit Courier is the smallest member of the all-new Transit range, and joins the Transit Connect, Transit Custom and Transit in the most comprehensive ever line-up of Transit vehicles.

"Ford has now completely transformed its commercial vehicle line-up, with four all-new, class-leading Transits for European customers," said Barb Samardzich, vice president, Product Development, Ford of Europe. "With the all-new Transit range, we expect sales to grow to 400,000 units per year by 2016, well over 50 per cent more than we sell today."

The Transit Courier goes on sale in spring 2014, when all four new Transit models will be available in European showrooms. The line-up will also include the spacious new high-roof version of the Transit Custom that is also revealed for the first time in Birmingham.

Ford's renewed commercial vehicle range is completed by the new Fiesta Van and new Ranger, winner of the International Pickup Award 2013, joining the Transits on the Birmingham stand.

The all-new Transit Courier marks a significant development for the Transit range, expanding the nameplate into the compact van segment for the first time.

Based on Ford's global B-segment platform, the Transit Courier delivers class-leading load volume of 2.3m3 (SAE) with standard full bulkhead within an overall length of 4.16 metres, and offers the agile handling and manoeuvrability of a compact vehicle.

"With 10 per cent more load volume and floor area than its closest competitors, the all-new Transit Courier brings a new level of productivity to the compact van segment," Samardzich said. "This is a stylish, practical and affordable new van that businesses will value for its agility and exceptionally low cost of ownership."

The Transit Courier will be available with highly-efficient diesel and petrol engines that target best-in-class fuel economy, and offer Auto-Start-Stop on all units. Customers can choose between the Dagenham-built 1.5-litre 75PS and 1.6-litre 95PS Duratorq TDCi diesel engines, and the remarkable 1.0-litre 100PS EcoBoost petrol engine, the "International Engine of the Year" 2012.

The cabin offers an ideal mobile-office environment, with smart stowage including a "mega-centre" console capable of storing A4 documents and small laptops; overhead stowage; and a storage drawer under the driver's seat. A device dock in the centre of the instrument panel enables occupants to store, mount and charge mobile devices including phones and satnavs.

The stylish all-new Transit Connect van sets new standards for load-carrying ability, cost of ownership and dependability. Available in short-wheelbase (L1) and long-wheelbase (L2) versions, the Transit Connect offers a spacious and practical load area with total volumes of 3.0m3 and 3.7m3(SAE) and a maximum payload of up to 1,000kg. Ford offers Van, Double-Cab-in-Van and Kombi derivatives.

The all-new one-tonne Transit Custom "International Van of the Year 2013" now on sale across Europe is the first vehicle in its segment to achieve a maximum five-star Euro NCAP rating. Now Ford is adding a spacious new high-roof version which makes its global debut in Birmingham.

The largest of the next-generation Transit line-up, the all-new Ford Transit two-tonne model is scheduled for European launch in spring 2014 to bring a new level of capability and versatility to the medium commercial van market, with a comprehensive range of body styles and derivatives including Van, Double Cab-in-Van (DCiV), Kombi, and Bus models, plus single and double Chassis Cab and Chassis Cowl versions.