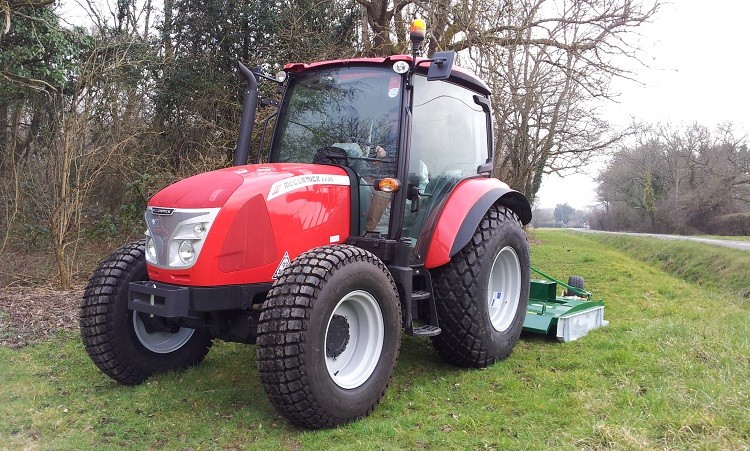 As part of a wholesale upgrade of the McCormick tractor range, seven new models have been developed for sports and amenity groundscare applications with unique transmission and engine combinations plus a spacious cab that will appeal to operators and owner-drivers alike.

The McCormick X4 Series is a small full-size tractor design with power outputs from 64hp to 107hp and a wide choice of specifications to suit different applications and budgets.

"The designers at Argo Tractors have given the McCormick X4 Series cab a lot of attention to ensure it provides a comfortable and practical workplace," says Paul Wade, product specialist at GB distributor AgriArgo UK. "It's quite a challenge making a cab to fit a small tractor that's in proportion but gives the operator plenty of space and good visibility – but the X4 designers have achieved that."

A narrow header rail creates a deep windscreen for maximum forwards visibility; full-size doors provide easy access with no "˜B' pillars to interrupt the view to either side; and controls on the right-hand console are angled towards the driver making them easy to use.

The novel idea of housing the cab air filters in the rear pillars makes them easy to reach for cleaning and results in a slim roof panel for low overall height – the four smallest models measure just over 2.4m to the top of the cab, while the three larger machines, which have a slightly longer wheelbase to maintain balance and traction with bigger implements, stand only a little taller at 2.5m.

Mechanical control of the 3.4-3.9 tonne lift capacity rear linkage can be upgraded to electronic operation on the 90hp X4.50, 99hp X4.60 and 107hp X4.70, with a 1.75 tonne front linkage and pto also available on these models for added productivity by operating front- and rear-mounted implements simultaneously.

Two- or four-wheel drive, cab or open platform, and a choice of synchro shuttle and power shuttle transmissions add to the specification mix.

Latest Deutz engines with simple emissions control technology feature under the bonnet of the 64hp X4.20C, 69hp X4.30C and 76hp X4.40C, which are slightly narrower and shorter than the others. There is also the 75hp X4.35C with a Perkins engine to earlier emissions rules, which gives it a distinct price advantage while engine stocks last.

"This new McCormick tractor design is unlike anything we've had in the range before and it readily complements our bigger tractors, which have also undergone significant upgrades and new features," says Paul Wade. "With the support of a professional dealer network and parts operations at our base near Doncaster and the Argo Tractors international parts distribution centre in northern France, it's a range that deserves consideration by anyone operating in the amenity sector."

Perennial, the charity for people in horticulture, is launching a...
...Read More

The search for UK’s favourite parks returns for 2022

Fields in Trust – the independent charity that has been...
...Read More