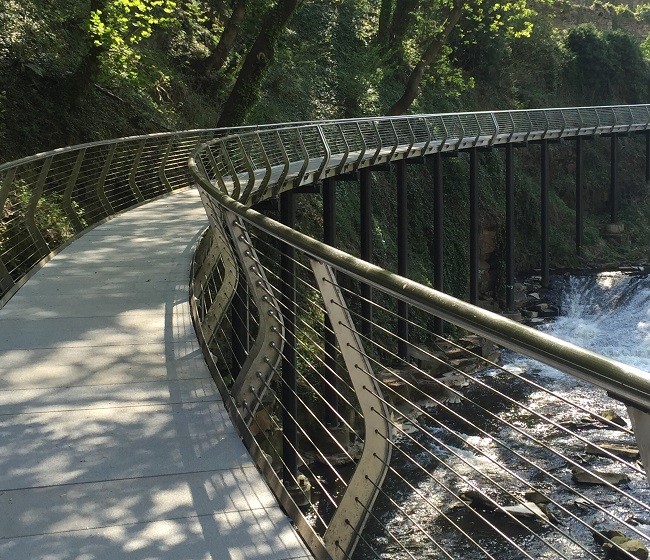 The safety of an award winning aerial footbridge in Derbyshire, which accommodates around 200,000 visitors a year including wheelchair users, has been improved with the addition of an anti-slip surface.

Rotten timber panels on the Millennium Walkway at New Mills in the Peak District, have been replaced with long-lasting, durable Glass Reinforced Polyester (GRP) anti-slip panels by Polydeck Ltd.

The £500,000 pedestrian footbridge was built in 1999 by Derbyshire County Council's Highway Structures engineers with public and private funding. It spans an otherwise inaccessible vertical gritstone cliff face and railway retaining wall, cantilevered out over the River Goyt, overlooking Torr Vale Mill, a Grade II listed building built in the 1780s.

Chris Spooner, managing director of Polydeck said: "Originally built from steel with timber panels providing the walking surface, regular inspections by council engineers identified that the timber panels were deteriorating significantly.  After a number of individual panel replacements, it was decided that the best long-term solution was to completely replace the rotting timber decking with Glass Reinforced Polyester (GRP) panels.

"We suggested the installation of our 30mm thick foam core structural GRP anti-slip panels which are mechanically fixed to the steel substructure.  The panels are designed to take a loading of 5kN per square metre uniform distributed load with a less than 1/200 deflection, to prevent sway.

"Following removal of the original decking and remedial work to the steel structure, the Polydeck panels were fitted and following installation, the bridge was given a thorough cleaning.

"The panels had to be supplied in a specific grey colour to comply with the original planning conditions imposed when the walkway was built."

The walkway provides a link in Europe's premier walking route, E2 which passes through New Mills on its way from Stranraer in Scotland, via Dover, to Nice in France. Shortly after it opened in January 2000, the Royal Mail featured the walkway on the 44p stamp of its first Millennium series. It took the top prize in the small projects category of the British Construction Industries Awards in the Millennium year, (The Millennium Dome won the large project category).