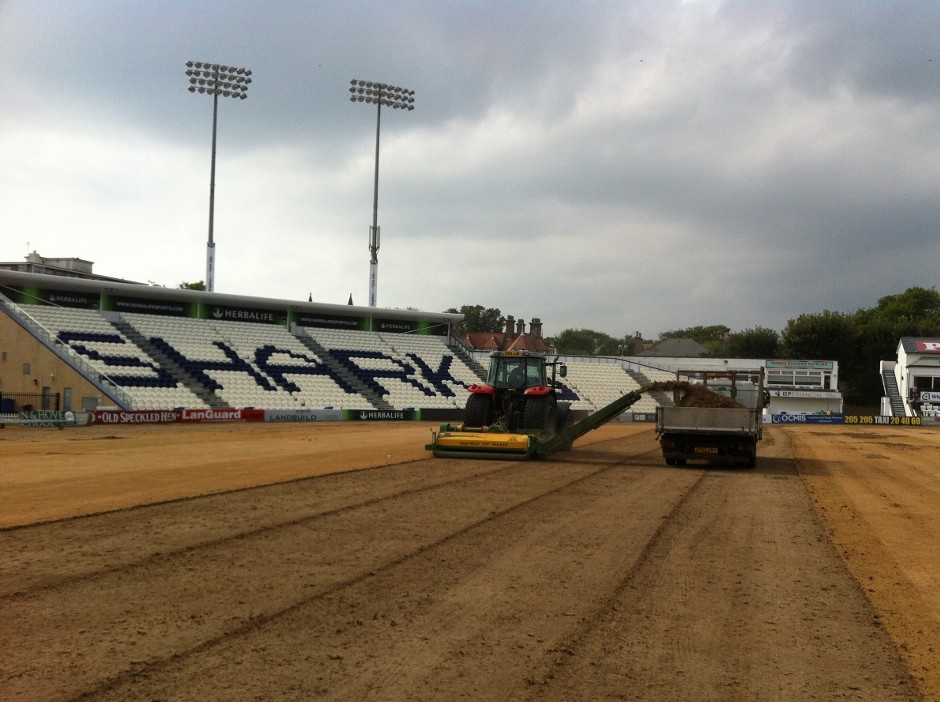 The work was carried out at the BrightandHoveJobs.com County Ground and the Sutton Winson Academy Ground, Blackstone.

Andy Mackay, who has been in the role as Head Groundsman for nine years, explains that his confidence in Barry Pace project manager for Speedcut Contractors was a big motivation in getting them to carry out this major project on two of the four grounds that he and his team of 12 maintain.

He said: "I've got a lot of faith in Barry and he worked from the design I gave him through to completion and that gave me a lot of confidence.

"I'm absolutely delighted with the work Speedcut have carried out because it has gone really well.

"The outfield is coping with the rain a lot more and it's an improved surface, it's smoother and it's better to field on. We are much better off now the work has been completed."

The job had to be carried out at the main ground due to issues with thatch and an uneven surface that meant Andy Mackay and his team was often at the mercy of rain which would build up in certain problem areas.

The Head Groundsman outlines the issues that had to be addressed and what Speedcut Contractors did to appease the problems.

"In the outfield at Hove we have quite a serious thatch issue," he began. "Although we've managed to reduce that over a number of years there is still a significant amount of thatch with up to 40mm in some areas.

"Speedcut Koro'ed off the surface and then regulated the top 100mm and laser graded with more drains in around the square to encourage positive surface flows away from the main play area.

"Five hundred tons of sand was added across the whole surface, which has given us around 25mm overall, this ameliorated in and then reseeded."

Speedcut also carried out work alongside Andy Mackay and his team on the nets area power harrowing, cultivating and grading the surface before adding root zone.

This was then fully laser graded to encourage positive water surface flows away from the net before Andy's team completed the work.

As well as a successful project at the main ground more work took place at the Blackstone based academy to vastly improve the cricket square for Sussex's young cricketers.

The academy ground was surveyed and cultivated to allow laser grading to level the surface to an optimum plane.

New loam was then added in layers before being laser graded, fertilised and seeded for the final preparation that has provided a quality surface for the young cricketers as Andy Mackay explains.

He said: "Our academy ground is where we develop our young talent so it has to be right.

"We're trying to bring young cricketers through and make them good older cricketers and they aren't going to learn those skills on poor surfaces, so it's absolutely vital that we provide good pitches for them.

"Speedcut came in and added an extra 50mm to the whole thing; laser graded it and then over seeded.

"It's played well so far and it looks very good, we aren't expecting miracles straight away because you have to allow a year for bedding and settling on a cricket square after that sort of work, but the ball bounces a lot more regularly and the bounce has improved overall.

"It's about improving standards generally and that's exactly what's happened with the work Speedcut have done at both sites."

Planning for a brighter future

Preparations for SALTEX 2020 are to continue as organisers assess...
...Read More