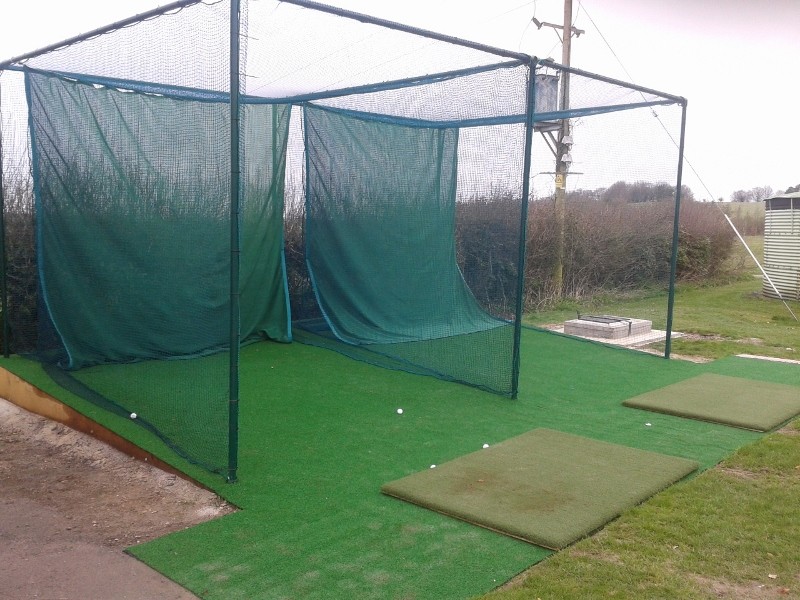 When North Wilts GC decided to install a Sportsmark double bay practice cage, they wanted it to be absolutely state of the art.

They took advantage of Sportsmark's "˜Free archery baffle nets' offer, so they won't need to worry about holes in the netting for some years, and they also decided to use Sportsmark's nylon non filled Tee Turf, which will is also highly durable.

A number of consultations later, Andy came up with his final plan, designed to address the main issues with nets as perceived by members. Key features include:
In terms of construction detail, the tapering frame was made with 40mm thick Oak planking, secured with well embedded oak stakes. The sloping surface was crushed stone and fines fully compacted to a smooth finish with a vibrating Wacker plate. The Sportsmark 9mm curled tuft artificial turf was stretched smooth and tacked to the oak frame. The tee mats were made 1.83 m square and fixed to a marine ply backing, so they can be turned if any wear occurs.

Club captain Steve Iles said: "Our new net is fantastic. The nylon mats are brilliant, as they hold tees, but are soft enough to hit irons off, and are much more realistic than the old type of mat. I also love the fact that I don't need to move off the mat to pick up my balls. I must have played at well over 100 different clubs, and I have never seen a net system to compare with this."

Moves to improve guidance on integrated approaches to weed, pest and disease management

The Amenity Forum already offers a series of guidance notes and...
...Read More

Applications have opened for the Future Turf Managers Initiative