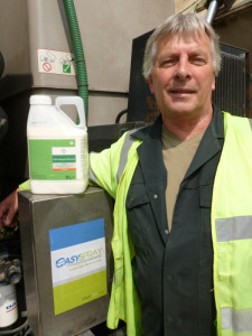 Redditch Borough Council has been responsible for the care of the residents of Redditch since the dissolution of Redditch Development Corporation in 1985. Redditch is a New Town, designated in 1964, situated 15 miles south of Birmingham it was designed to house the overspill from the city of Birmingham. It has a population of almost 80,000 and over 38,000 properties within a borough that has a diameter of 18 miles.

Dave Steele is Environmental Operational Services Team Leader within the Street Cleansing department of the council. Dave has worked within the council for over 30 years, the last 5 of which have been specifically within the Street Cleansing department. The town is a New Town designed to make the most efficient use of the space available providing Dave with some interesting problems i.e. there is 99 miles of hedgerows that require cutting by hand twice a year and because of their inaccessible location alongside primary paths that run through the various estates it's not possible to use a flail hedge-cutter.

As a New Town, the road systems of Redditch were designed with dual carriageways to allow rapid flow of large volumes of traffic around the various districts and into the town centre, whilst keeping fast moving vehicles separated from residential streets.

To keep on top of highway weed problems, in August 2005 Redditch Borough Council purchased an EasySpray® PKS (Pavement and Kerb CDA Sprayer) unit. This unit has now been in continuous use for 8 years. The  EasySpray® PKS is fitted to a Scarab Merlin street sweeper and forms part of the integrated system that enables Redditch to both keep their streets clean and weed-free. Eight years is a good time to assess if the system is working and how it integrates into their weed control system.

The road-sweeper is making passes along highways throughout the year, therefore equipping it with the ability to control weeds was a natural next step. Rob Hamilton, the operator of the Scarab, states that the  EasySpray® PKS is serviced before the season commences and even after 85,000 miles it continues to be trouble free. Rob goes on to say that "it's doing the job of two people, sweeping and weed control. It's an easy and trouble-free system to use, because the EasySpray® PKS cleans and primes itself. It's done over 85,000 miles of street cleaning and weed control over the eight years and although it's looking a little old it still works brilliantly. We're extremely happy with the system."

Dave Steele says that the cost savings are evident "We moved to spot-spraying last year in the run-up to legislation that means we cannot blanket spray herbicide on non-porous hard surfaces and the  EasySpray® PKS is perfectly suited to spot spraying, with the operator able to target problem weeds. The road-sweeper is a big, visible machine that people are used to seeing; using the EasySpray® PKS on the road-sweeper ensures we minimise any potential risks to the driver of the Kawasaki Mule. Cost savings are particularly evident when you realize that it costs my department £14,000 each time we want to close one lane on a dual carriageway for a fortnight and we have sections that we have to do three times a year. With the PKS there is no need for traffic management systems, Rob can clean and spray them effectively and safely." Jonathan Carr, Technical Manger at SprayCDA.com recounted the benefits of the  EasySpray® PKS :


So would Dave recommend the system? "Absolutely, we're considering obtaining a new road-sweeper, but key to our purchase will be ensuring that we have it fitted with a new  EasySpray® PKS system. It's a robust system that saves us time and money. The combination of the EasySpray® PKS and CDA vanquish means that we get year round weed control."

Perennial is asking people working in horticulture about...
...Read More

The GMA has decided to not hold the GMA (previously IOG) Awards ...
...Read More