The duo did a fantastic job and achieved an amazing fourth place as well as receiving the Medallion of Excellence, showing that they are working to an international skill level.

Speaking of the competition, Shea McFerran said, “Competing at WorldSkills Kazan has been the toughest experience for me yet, but when it finished both Sam and I got the biggest buzz. To know our work was judged to be the world standard in landscape gardening is just an amazing feeling.” 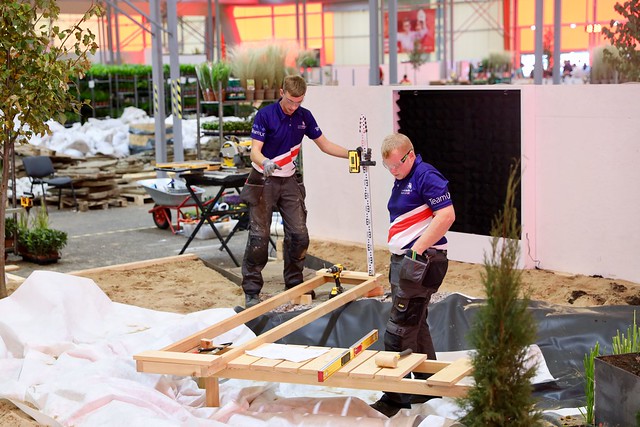 Sam Taylor commented, “I am really happy with how the competition went knowing that myself and Shea put 100% into it. Being able to say you have represented your country at a world class competition is special but being able to say you achieved 4th place and receiving a Medallion Of Excellence is unreal! Couldn’t be happier with the end result.”

Over four days (22 hours of competition) Sam and Shea had to build a garden based on a Russian style design that incorporated a large lake in the middle which was surrounded by wetlands and had a waterfall which cascaded out of natural stone. There was a natural stone path in the garden which Sam and Shea had to cut by hand, and there were steel raised flower beds to be constructed. As well as being marked on the final construction, they were also marked on elements such as work organisation and management, customer service and communications and garden design and interpretation.

The WorldSkills competition takes place every two years and hosts the world skills competition which attracts more than 1,300 Competitors from more than 60 countries. At this event, young people from all corners of the globe gather together for the chance to win a prestigious medal in their chosen skill. There are competitions in 56 skills across a wide range of industries — from joinery to floristry; hairdressing to electronics; and autobody repair to bakery. The Competitors represent the best of their peers and are selected from skills competitions that are held in WorldSkills Member countries and regions.

This year is set to be one of much challenge and change for all...
...Read More

Findings from the SALTEX 2019 post-show survey have revealed...
...Read More