Delegate feedback showed that the subjects covered, including using soils sustainably in landscape projects, the management and preparation of back garden soils, and recycling and conditioning topsoil, were particularly relevant to the audience. 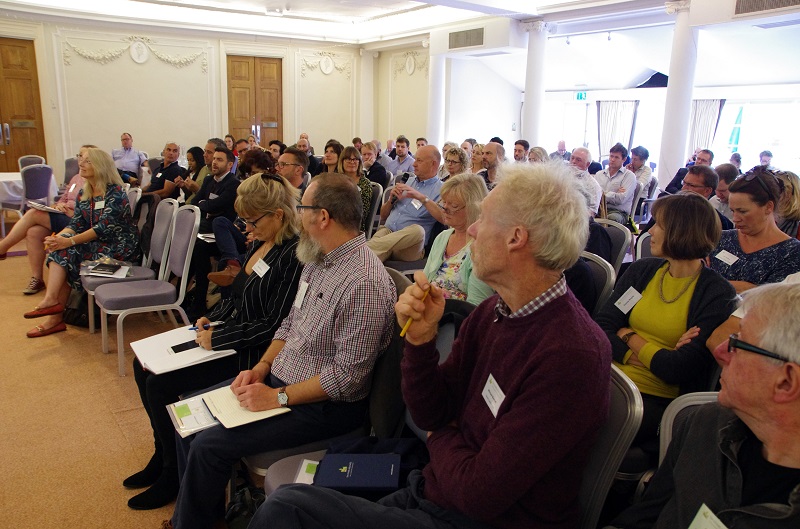 The speakers for 2019 provided delegates with knowledge across a range of soil-related subjects that will enable them to take a more holistic approach to working with soils sustainably.

Following a brief introduction by Tim O’Hare, Neville Fay, a chartered arboriculturist and Founder/Director of the Sustainable Soils Alliance was first to speak. He explained the vital mutually supportive relationship between trees and soils and the threats posed by the loss of c. 2.9 million tonnes of topsoil a year.

Next up to the podium was Tim O’Hare, who delivered a masterclass in sustainable soil use in landscape projects. Tim took delegates through the soil planning process and stressed the importance of understanding the site soils they are working with from a very early stage.

After the morning break, during which a Soil Surgery was held, staffed by soil scientists from Tim O’Hare Associates, the next speaker was Sarah Morgan, garden designer, horticulturist, lecturer and Chair of the Society of Garden Designers (SGD). Sarah’s presentation demonstrated why knowledge of geology and soil should influence the design of landscape projects if they are to be successful in the long-term.

Closing the morning’s presentations was Tim White, Senior Associate at Tim O’Hare Associates, who talked about the management and preparation of back garden soils. With particular emphasis on the gardens presented to homeowners on new build developments, Tim discussed the difficulties presented by construction sites, where the presence of many different trades, their plant, machinery and vehicles, and the limited space for storing topsoil presented the ‘perfect storm’ in terms of soil management.

After lunch, soils scientist Simon Leake, Managing Director of SESL Australia, discussed the design of low fertility soils, referencing the Barangaroo project in Sydney for which he designed the project soils. Following on with the theme of manufactured soils, the next speaker was Andy Spetch, National TOPSOIL Manager at British Sugar plc.

Choosing and using mulches was the day’s penultimate presentation, delivered by Catherine Dawson, Technical Director of Melcourt Industries. Opening her presentation with an explanation of the physical properties of different types of mulch, Catherine then looked at the various claims for what mulch could achieve, giving delegates clear guidance on the correct selection of mulch, how to apply it, and the expected outcomes for planting schemes when best practice is applied.

The day’s final presentation, and possibly the most photogenic, was on Wildflowers – superheroes of green infrastructure and urban greening, delivered by Helen Gillespie-Brown, Business Development Manager at Wildflower Turf. In her presentation, Helen explained the development of wildflower turf and how it is grown, including the selection of seed mixes for different landscape applications.

SoilsCon has proved, once again, that there is a real urgency amongst landscape and construction professionals to improve their understanding of soils and how to use them in a more sustainable way.

"It was obvious from the comments we received on the day, and in the feedback, that delegates appreciated the breadth of subject matter and went away much better informed and able to apply the knowledge in their work.

"I am indebted to the amazing speakers who without exception brought the subject to life for those in the audience and I hope that many of those who attended will now actively support the work of the Sustainable Soils Alliance in its mission to seek fundamental change in the way soils are regarded and treated.”

The Government has set out its Immigration policy post-transition...
...Read More

The Land Trust has welcomed the findings of the Building Better,...
...Read More