Twenty-five years of raising the standard

The Green Flag Award will be presented for the 25th Year and organisers hope to see five of the original winners achieve the Award for the 25th time having first received the accreditation in 1997.

In 1996 a group of individuals and organisations came together in response to the decline in funding and quality of our parks and green spaces to develop a national standard to measure quality and to provide a framework for improvement.

In the initial years the Scheme was managed by ILAM on behalf of the Green Flag Award steering group, in 1999 the administration of the programme transferred to The Civic Trust and was managed from their Liverpool office until 2009, during this period the ownership of the Award was transferred to the UK Government, Office of the Deputy Prime Minister, now the Ministry of Housing Communities and Local Government. 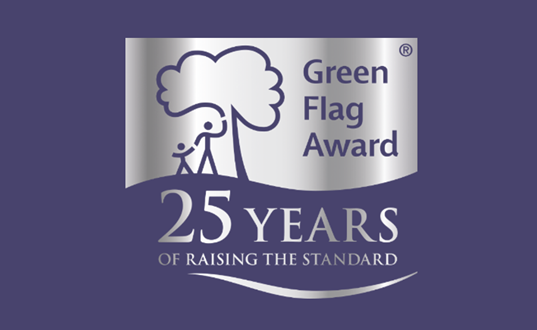 By 2009 over 1,000 parks and green spaces were proudly flying the flag and the Scheme was now in all UK nations and had been trialled in The Netherlands and the Republic of Ireland.

In 2002 the Green Pennant Award, now called the Green Flag Community Award was launched for sites managed by volunteers or community groups, there are now 349 winners

During 2003 with the support of Historic England the Green Heritage Site Accreditation was launched to recognise those Green Flag Award winning sites that, recognise, conserve, enhance and promote and share the historic value of their park or green space. Today, a total of 109 sites are in receipt of the accreditation.

In 2009, the management of the Scheme transferred to a consortium of keep Britain Tidy (KBT), BTCV and Greenspace and to sole management by KBT in 2012.

Over 25 years the type of sites applying for the awards has diversified, with cemeteries and crematoria, canals, university campuses and museums now some of the 2221 sites in receipt of the Award, along with many traditional parks, country parks and community gardens.

In 2008, the first International Award when sites in The Netherlands first received their Awards at a ceremony in Liverpool. The scheme has since expanded to include 14 countries outside the UK including the USA, United Arab Emirates, New Zealand and Spain.

The Scheme has been supported by over 1000 judges who have given hundreds of thousands of hours to the programme, carrying out assessments and providing invaluable advice to park managers across the world, without their support the scheme would not be the success it is today.

The 2021 winners will be celebrated in October.

The pandemic has impacted on every aspect of daily life and...
...Read More

In response to the growing importance of greening our world’s...
...Read More