A record number of parks and green spaces worldwide are winning Green Flag Awards in 2022.

Ireland announced a record breaking 105 winners, and now another 32 winners are celebrating - as the Awards for several other European countries were announced.

Parks and green spaces in Belgium, France, Germany, The Netherlands, Portugal, Spain, Sweden and Turkey were accredited with the coveted Award - including several first time winners. 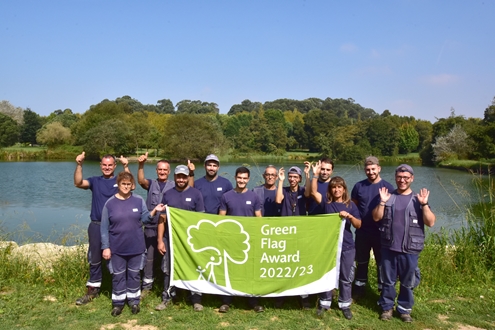 The Green Flag Award is the international quality benchmark for the public green space sector - now operating in 17 countries around the world. Running for over 25 years, the programme uses eight key criteria headings to for assessments. Both the management framework for each site, as well as an annual condition inspection is conducted through a network of qualified judges. So far in the past twelve months over 2,400 sites have received annual accreditation.

In July the UK announced a record breaking 2,208 winners this year, which includes 361 Green Flag Community Award winners. And back in August, Finland released results for 12 winners including two new parks.

Further announcements are scheduled later in 2022 for more winners in Australia, Mexico, New Zealand, USA and the United Arab Emirates.

Carl McClean, International Development Manager for the Green Flag Award said: “It’s fantastic to see the European parks sector achieve well-deserved international recognition with so many Green Flag Awards. It’s clear that the past few years have been really challenging.”

“Congratulations to everyone involved in stepping up and raising the standard. It’s important that we all continue to showcase the vital role parks and green spaces serve in our communities, for our health and to the environment.”

Updated standard for greenkeeping apprentices to be rolled out

Perennial, the charity for people in horticulture, is thrilled to...
...Read More