Prior to major product trials which are scheduled to start in spring 2019, Precision Microbes launches its new blend of beneficial micro-organisms into the European golf greenkeeping industry on 31st October at IOG SALTEX 2018, which is at the NEC for the fourth successive year.

Paul Kenneally and John Paul Ennis from Precision Microbes will be on stand E195 to talk about the unique mix, which has achieved substantial early success in sports turf tests in Spain and Germany.

Next year’s trial will involve several dozen golf clubs in Great Britain and Ireland. Kenneally and Ennis are hoping to meet with candidate clubs at SALTEX, with the final list of venues due to be confirmed by the end of February 2019.

“Soil biology is set to become a very important topic in the sports grasses market, with new regulations coming in and less weapons in the greenkeeper’s armoury” said Kenneally. “Our trials in spring 2019 will be, in my opinion, very educational for the golf industry. 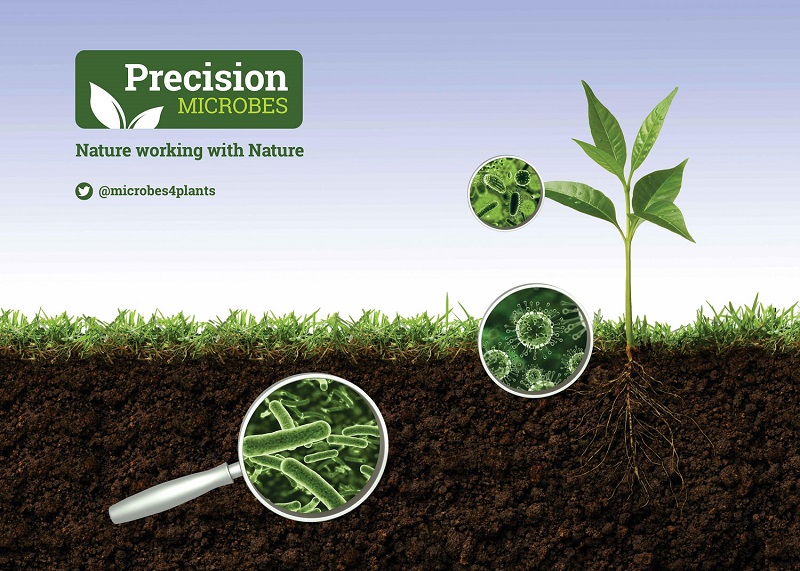 “Our product is not a silver bullet, but we believe that it will become an extremely important part of future maintenance regimes at golf courses.”

Precision Microbes has already begun introductory trials at golf clubs in the UK, Ireland and on mainland Europe. “Our objective at SALTEX this year is to engage with our existing clients in golf, and also to identify golf clubs with the potential to engage in our trial starting in spring 2019” said Kenneally.

He continued: “The more clubs that get involved, the better, as we will then be able to show the advantages of Precision Microbes on all types of grasses and rootzones, and also at golf clubs with different levels of budget. The results will of course vary according to the local environment, the types of fertiliser used, and different maintenance regimes, but if we get enough GB & Ireland golf clubs in the 2019 trial we will be able to calculate the correlations, and show the benefits one should expect from Precision Microbes depending on your circumstances.”

Established in 2015, Precision Microbes has already attracted prestigious customers in the football industry with the product now in use in seven stadiums in Spain’s La Liga, including Real Madrid and Valencia, and at several of the top clubs in Germany’s Bundesliga, including Borussia Dortmund and Wolfsburg.

Golf clubs currently trialling the product include La Moraleja in Madrid, Grand Ducal in Luxembourg, Hart Common in England and Milltown in Dublin.

Richard Roberts at Hart Common said: “A lot of your problems stem from the build-up of organic matter. In our ongoing tests at Hart Common, the Precision Microbes mix seems to be helping to break down the unwanted organic matter, releasing nutrients, and among other things our greens are now draining a lot better, with a truer, smoother roll which our golfers appreciate.

"Precision Microbes has definitely saved us money over the season, reducing our costs on chemicals, fertilisers and wetting agent – even during a very dry summer. We will definitely be carrying on with it.”

Precision Microbes creates amazing grass growth with its blend of up to 60 different micro-organisms and probiotics, all working together for the benefit of the plant and the soil in which it lives. Suspended in a liquid, it is mixed with water and sprayed onto growing surfaces as a soil and plant conditioner, reducing reliance on fungicides and pesticides.

Paul Kenneally said: “If you are building a new golf course, or renovating an existing one, we can guarantee that it will be open earlier with Precision Microbes. The product is unique, and there is nothing else like it available today.”

SALTEX 2021 integral to the industry’s recovery