Following the overwhelmingly positive response to a survey commissioned by BP’s innovation business Nexcel, the company will be demonstrating its active oil management system at SALTEX, NEC Birmingham, on October 30-31.

Of the over 1,700 respondents to the survey conducted of Lawnsite.com subscribers, 82% were interested in having Nexcel technology installed on their next machine.

Nexcel offers significant sustainability benefits, promoting collection and reuse of used engine oil, and could drastically reduce machine maintenance times: based on figures that 91% of maintenance is carried out in-house, adoption of Nexcel could save respondents a total of 12,000 working days annually.

“When compared to traditional sump-draining methods, Nexcel can enable faster, less messy oil changes with reduced risk of engine failure,” says Ben Russell, Nexcel commercial director. “The sealed oil cell design keeps the risk of oil spillages to a minimum. The cell can be installed into the engine in one easy step and can be changed, complete with filter, in as little as 90 seconds. The simplicity of the system makes it ideal for adoption by the commercial small engine market, and the precise oil management it offers is perfect for the lawn and landscaping industry, where engines work at maximum output for prolonged periods.” 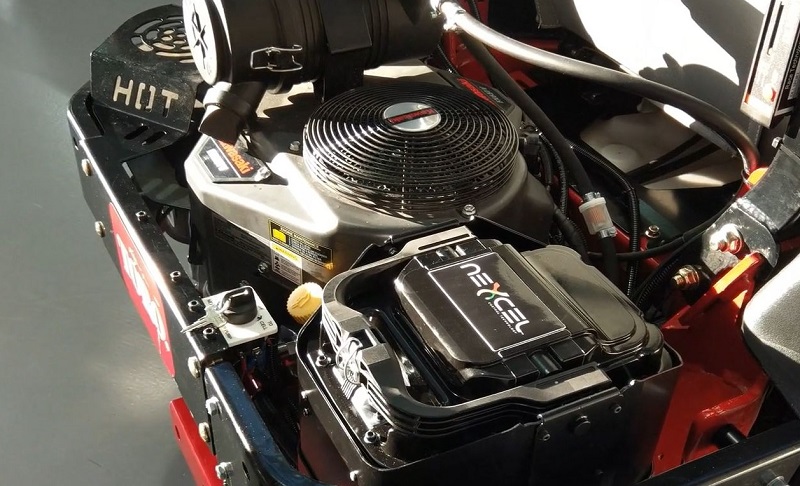 According to the survey, respondents take 20- 30 minutes to carry out an oil and filter change. The results also demonstrate that 75% of operators change the oil filter at every change, regardless of scheduling. This enhanced level of preventative maintenance is aligned with Nexcel’s ethos of providing improved efficiency and simplicity through precise oil management.

“Incremental improvements can have a notable impact on large fleet efficiencies,” explains Russell.

“The demonstrator machine that we have developed for display at SALTEX 2019 has been designed to showcase the simplicity of the Nexcel system on a current machine, and to give a clearly understandable representation of how it can be used to help large fleets. Nexcel is designed to be modular and tailorable to individual small commercial engine manufacturers’ specifications. Engine technology has moved on a long way since lawn and landscaping machines were first commercialised, and Nexcel aims to bring oil management and servicing in-line with current technology.”

“Having a positive impact on the environment is at the core of Nexcel’s business,” concludes Russell. “We are very proud of having the potential to boost engine’s efficiency, simplify the oil maintenance, and make it easy for disposing of used oil. Quality of supply is the biggest hurdle for efficient re-refinement of used oils – the lack of segregation can lead to the supply of heavily contaminated, poor quality oils that require significant cleaning and filtering.

"Nexcel provides that segregation and can promote the re-refinement of high quality base oils with increased yield, reducing the reliance on natural resources.”