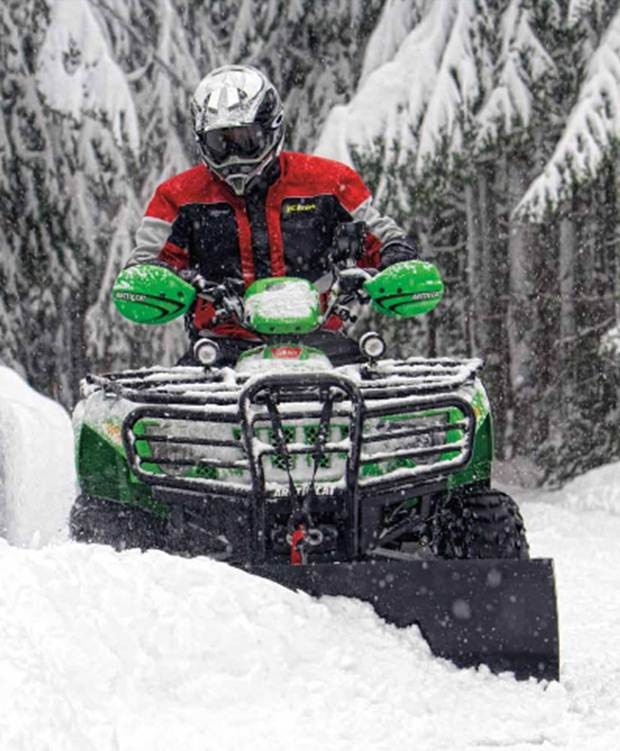 Winter isn't coming, it's arrived, but with WARN's ATV Snow Plow systems clearing paths in the deepest snow there is no need to panic.

Often when people think of snow related vehicle products, they instantly think of snow chains – Or just rely on and hope their trusty 4x4's get them through.

However there is another snow product, which doesn't just help in snow.

There are a variety of WARN Snow Plow Systems available on the market for a host of ATVs. These systems not only plough snow to clear paths for other vehicles, but they can also be used to relocate build ups of snow to prevent flooding around property when the snow eventually melts. Once the snow has cleared away the uses do not end. These systems are designed for all year round use and are ideal for agricultural purposes such as clearing yards, pothole filling and moving medium weight loads such as gravel, chippings or muck heaps.

The kits are made up of several pieces, with varying options for the user to pick from. All Plow Systems require a WARN mounting bracket to be fitted. These come in two variations, both front and centre. Both mounting options can be left attached to the ATV when the plough is not in use. The front option is quicker to initially install (and remove), however the bonus of the centre mount is that it adds to the overall rigidity of the under chassis of the ATV.

These mounting kits are then attached to the appropriate Plow Base and it is the Plow Base that the blade or bucket is attached to.

When it comes to choosing the blade there are two things to consider. Firstly what the blade is going to be used for the majority of the time and also if a bucket fitment is required. WARN's Straight Blades are heavier duty and more suited for users where snow movement will be the minority use and agricultural the majority. It is also only the Straight Blades that are compatible with the WARN Plow Bucket attachment, which can lift a weight of 90kg. The Plow Bucket is complete with a dump release which is operational from the driver's seat.

The second blade option is WARN's Tapered Blade, which is best suited to majority snow movement use, however it can still be used agriculturally for "˜lighter' jobs such as scrapping cow yards. This blade gives a greater clearance when it comes to moving snow. With a curved profile design; it throws snow further to one side when ploughing through it, making it ideal for clearing pathways and roads. The Tapered Blade is also better suited to the ProPivot, which is an optional added piece of kit which rotates the blade up to 28 degrees at the push of a button. The ProPivot really will make quick work of ploughing activities.

Lastly is how to lift the Plow System. If you already have a winch this it easy, simply hook it straight up, however if you don't have a winch already installed there is an alternative: the ProVantage Plow Lift. This piece of kit is compatible with all the Plow Systems, whether new or old. The ProVantage Plow Lift effortlessly lifts the Plow with the activation of the included handle bar mounted switch.

Within just a few weeks of renewing their partnership as official...
...Read More