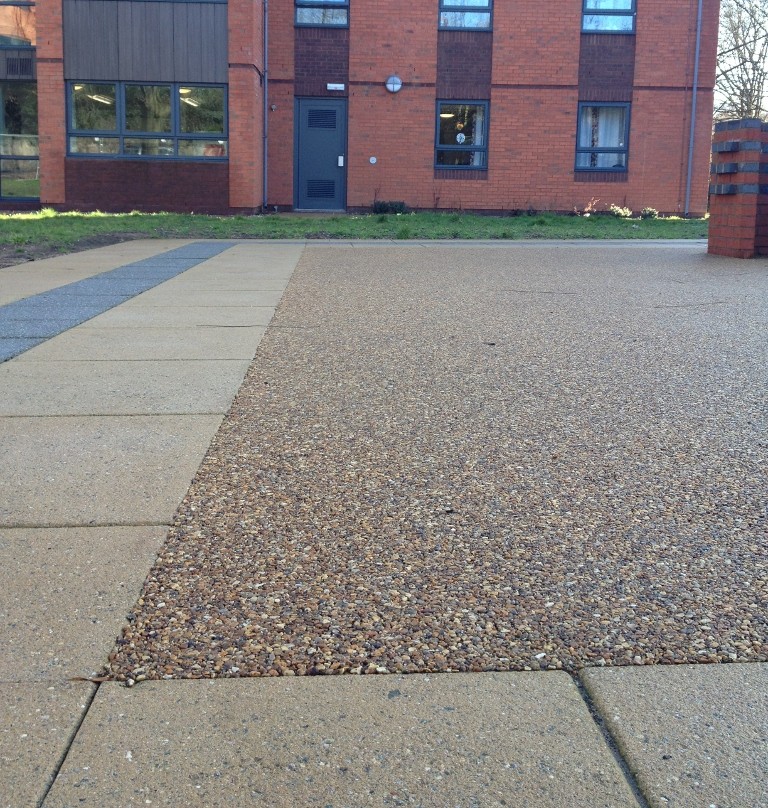 A major building project at the University of Birmingham involved building new student accommodation and external works to some of the existing buildings.

As part of the development and refurbishment new paths were laid leading up to and around the accommodation.

A total 1075 square metres of resin bound surfacing have been laid on the paths to create a durable, slip resistant and aesthetically pleasing surface for the students to walk on. Specialist student accommodation contractors, Ocon Construction appointed Route One Highways to lay the surfacing.

The product used by Ronacrete Approved Contractors Route One Highways was RonaDeck Resin Bound Surfacing with a Harvest Crunch aggregate blend, it was laid on a prepared asphalt base.

The RonaDeck Resin Bound Surfacing system was supplied as a two-component UV stable polyurethane resin to be mixed with a blend of kiln-dried decorative aggregates.

The two components of the resin were mixed with a slow speed drill and paddle before being added to a large forced action mixer containing the aggregate blend.  After ensuring that the aggregate was fully coated with resin, Route One Highways operatives spread RonaDeck Resin Bound Surfacing to level and smoothed the surface with a steel float.  The finished surface was ready for students' feet within four hours.

Ronadeck Resin Bound Surfacing satisfies SuDS requirements, allowing rainwater to quickly and easily drain through the porous surface.  All blends have been tested for slip resistance in wet and dry conditions; test results show the risk of slip to be low.

RonaDeck Resin Bound Surfacing is a UV stable resin bound aggregate surfacing; its functional properties and decorative appearance make it an attractive choice for a wide range of paving applications.

The majority of the Independent schools across the UK fully...
...Read More

API partners with the LANDSCAPE Show for its 10th birthday

Born out of the common goal to provide a united voice for the...
...Read More