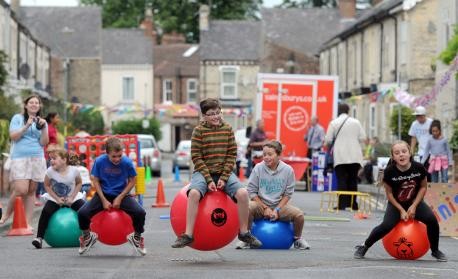 Intolerant attitudes and a lack of dedicated community spaces are preventing children from playing out where they live, survey results released for Playday 2013 have revealed.

The survey, commissioned by Play England, Play Wales, Play Scotland and PlayBoard Northern Ireland, found that over 50% of adults reported playing out at least seven times a week when they were growing up, compared to less than a quarter of children (23%) today, with 40% of children saying they want to play out more.

Alongside concerns about traffic (53%) and stranger danger (40%), which both consistently appear high on the list of factors stopping outdoor play; over 1 in 4 (28%) adults cited intolerant neighbours as a major barrier stopping children playing out where they live. Over a quarter (28%) of parents fear being judged by neighbours if they let their children play unsupervised outdoors, while almost a third (32%) believe allowing their children to play ball games or make noise outdoors would cause problems with other residents. It is hardly surprising that a quarter of adults (25%) felt that a more friendly community and better relationships with neighbours would encourage young people to play outside more often.

In addition, a lack of dedicated community space was also cited as hampering children's opportunities to play, with almost a third of adults (32%) and a fifth of children (20%) saying that more spaces to play within their local community would get more children playing out.

However, the research shows that play has the power to bring communities together; with 40% of adults saying that children playing out where they live improves community spirit, and almost half (45%) saying it helps families to get to know each other. All it takes is one or two families to take the first step; with 60% of parents saying they would feel confident to let their kids play out if others were playing too.

Results from the survey of 3,000 children, adults and parents have been released as an estimated 852,000 children and families nationwide celebrate Playday – the national day for play in the UK, held this year on August 7.  Hundreds of individuals, families and whole communities will hold celebration events across the UK as part of this year's Playful places campaign, which calls on everyone to help make sure that the places where children live and hang out are great places to play.

Cath Prisk, Director of Play England said: "It's up to all of us to turn around the creeping disappearance of children from our streets, parks and communities. We all have role – as families, neighbours, and friends. We can all do something to say we love kids playing outdoors, that we want to live in communities that actively welcome kids playing out. There always was and always will be some people who want to squash kid's fun – but there are far more that really want kids back outside playing, not stuck indoors, especially over the summer holidays.

"If every councillor and MP committed to ensuring every child in their communities could play outside in their street, in playgrounds or local parks for at least an hour just five days a week, think of the difference that would make to every child's health, to the number of friends they can make and most of all to the fun they can have."

Mike Greenaway, Director of Play Wales said: "We need to recognise the importance of providing children with time, space and freedom to play in their own way. We need to support them and recognise that for their health, wellbeing and long-term development children need playful places and opportunities to play outside. Whilst every day of the year should be a play day, national Playday is our annual opportunity to celebrate and campaign for children's right to play."

Marguerite Hunter Blair, CEO of Play Scotland said: "As well as a celebration of children's right to play, Playday is a campaign that highlights the importance of play in children's lives. We know that children across the UK would like to play outdoors more than they already do, with more opportunities for a wide range of play opportunities wanted. Playday is a great opportunity for children to have these experiences and get out to play more in their communities and for there to be a celebration of play. Children and adults can enter into the true spirit of play which is child focused, spontaneous and fun – it is not a weather dependent event, and you can be sure that everyone will get a bit damp and dirty before the end of the day."

Jacqueline O'Loughlin Chief Executive of PlayBoard Northern Ireland said: "Consensus is spreading; play, especially playing outdoors, makes sense. It makes sense for families, society and the economy.  Play is fundamental to our children's enjoyment of their childhood; it can't be taken for granted.  All of us, from parents to planners, from neighbours to policy makers have our part to play in allowing and supporting children's play as it is vital for our children's health, learning, development and happiness."

Showcase playground equipment and other grounds maintenance products at SAGE

A funding boost of £2 million will help the School Games help...
...Read More