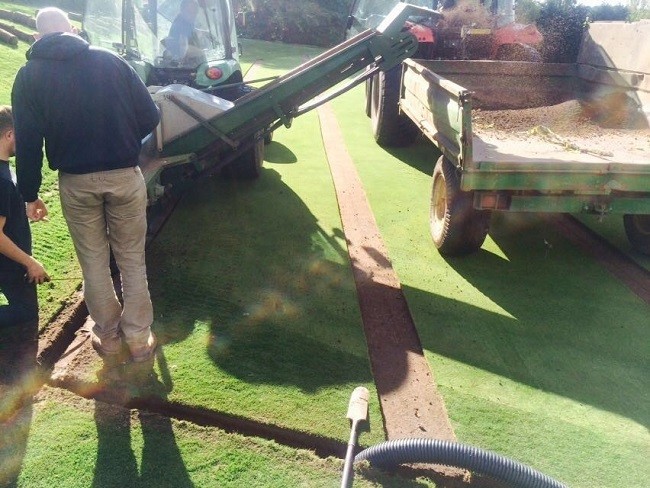 Droitwich Golf Club can trace its history back to 1897 when it was a nine hole course. By 1923 it boasted eighteen holes when the course was redesigned and extended by James Braid.

Today the push-up clay construction of the greens mean that Course Manager Gary Watkins has some real problems with drainage, especially in winter in particular, enough for Phil Day Sports to be called in to improve the situation.

"There were five or six greens, at the bottom of banks that just did not drain," explained Gary. "Three in particular were continuously laying wet which meant the majority of the time golfers ended up playing on temporary greens. Me and my team did all we could to manage the thatch and get water through the profile, but once it got to the clay base it wasn't going anywhere. This convinced the committee the best way forward was to install some drainage."

Gary decided to seek advice before deciding. "Phil Day Sports had been out in the past and done some jobs for us, so we asked Toby to come in and look at the problem and see what PDS could do. We knew their work would be efficient and to a high standard as well as price competitive."

The PDS solution was to install a main carry drain as none of the affected greens were near a positive drain outlet. Primary land drainage was then added on the 4th, 13th and 14th greens. After removing the turf, 60mm diameter pipe drains were installed at two metre spacing and 450mm depth. The drains were then connected up using purpose made junctions to the carrier drain. They were then backfilled with gravel and topped with a 200mm sand layer before finally the turf was re-instated.  This installed system has helped to maintain a free-draining playing surface in all but the most extreme weather conditions.

All three greens were completed within a week and back in play within another three.  "The whole process was smooth and straightforward," says Gary.

"The greens committee were so pleased with the work that they've already agreed to have another three greens done at the end of this year. The overall aim is to sort all of our problem greens and we won't hesitate to work together with PDS to achieve this."

With increased demand for disinfecting, sanitising and cleaning...
...Read More

IQ4-Cloud takes web based irrigation management to a new level

Dedicated to the development of the most advanced irrigation...
...Read More