Powdery mildew is a foliar disease, which occurs on a wide range of ornamental plants, shrubs and trees. This year it has been a common sight due to warm, humid conditions, and it is most severe in late summer months. Rose, oak, hawthorn, lilac, sycamore, laurel and crabapple are among the species most commonly affected. Although it rarely causes permanent damage, the disease can cause premature defoliation, a weakened plant immune system and an unsightly powdery appearance. 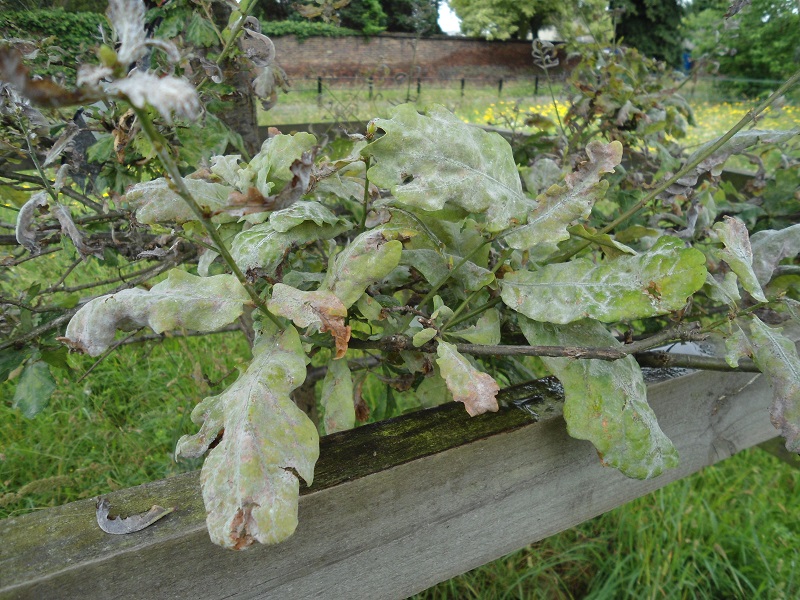 Approximately six genera of fungi cause powdery mildew on specific woody ornamentals. The fungi overwinter as mycelium in the bud or as spores on fallen leaves. Initial infections occur directly from the overwintering mycelium or windblown spores. Under favorable conditions, the fungus develops on the surface of host tissue producing a mat of white mycelium. It feeds by producing specialized peg-like projections called “haustoria” which puncture host cells and absorb its contents. Spores produced on the mycelium impart the powdery appearance to infected plant parts and are responsible for secondary infections.

Incidence and severity of powdery mildew can be reduced through various cultural practices. Extremely susceptible species should be planted in at least partial sun and pruned periodically to increase air circulation. Fertilisation in the dormant season will prevent excessive late-summer growth, which is most susceptible to damage by powdery mildew. Good sanitation practices including the removal of fallen infected leaf material will reduce the amount of inoculum available the following year. Fungicide sprays will effectively control powdery mildew if applied at 2-3 week intervals from when infection is first observed.

The HTA launches ‘Plants Near Me’

Following on from the HTA campaign last week to highlight the...
...Read More