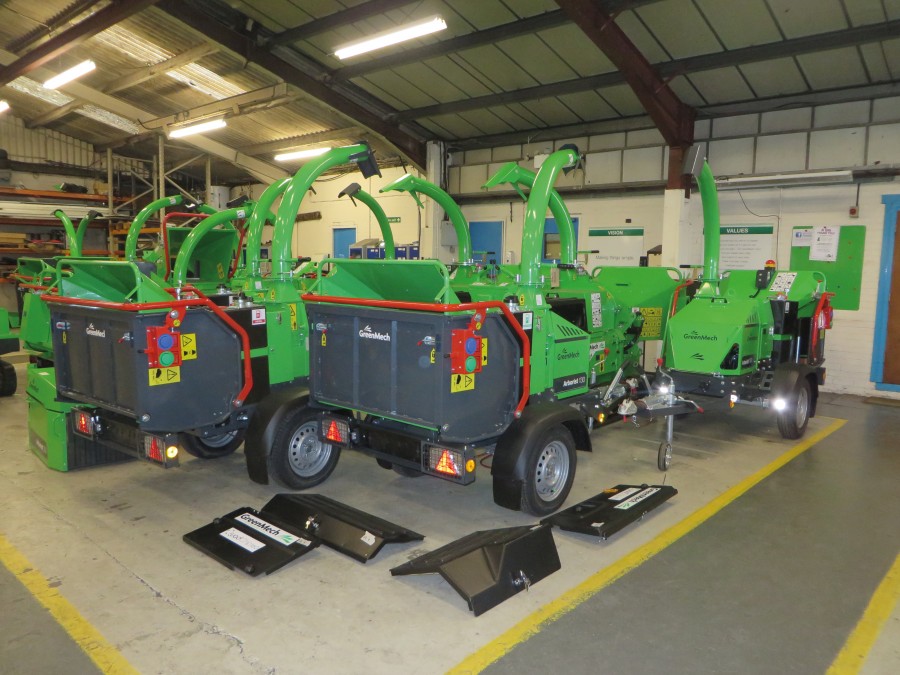 Family business GreenMech has expanded significantly since being established by Tony Turner in 1993 at Kings Coughton, near Alcester, Warwickshire, to become one of the leading suppliers of woodchippers in Europe.

After 30 years in machinery manufacturing – including developing the flail hedge cutter that became the flagship of Turner International’s range – Tony had seen a growing interest in woodchippers, which his company had some experience of importing.

“At that time, ‘no burn’ legislation was affecting land managers, even golf clubs, and there was a need to find alternative ways of handling wood waste,” explains Sales Director Martin Lucas. “Chipping removes air from the material, reducing its volume and produces an end product that can be used as a weed suppressant, to create footpaths and as a commercial biomass fuel.”

As the market developed, it has evolved into three distinct sectors, which require different versions of the same equipment: landscapers, arborists and ‘de-veg’ contractors working in applications such as rail clearance and utilities. 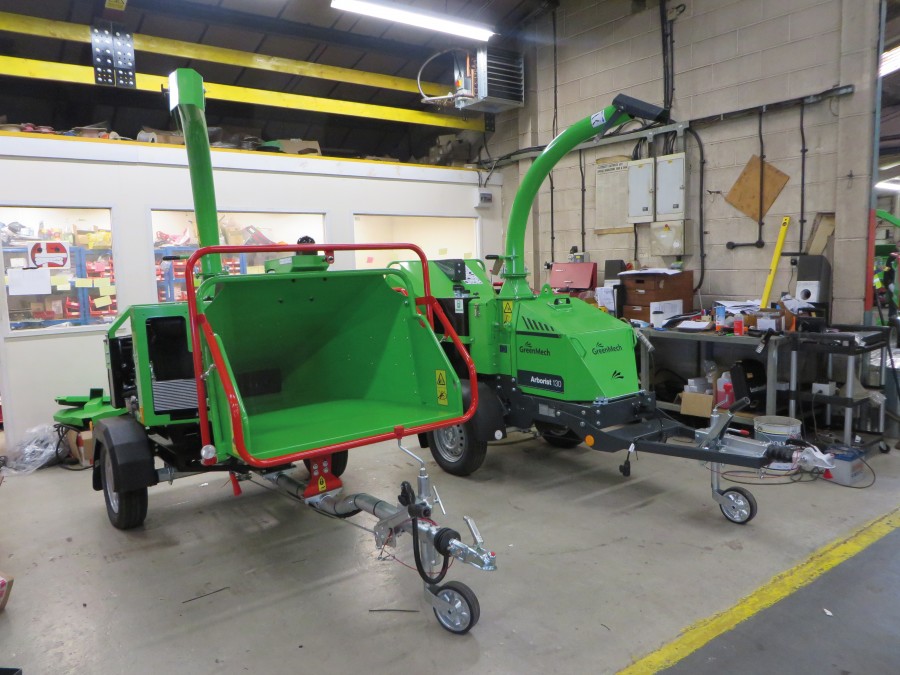 The full GreenMech range for all these sectors is manufactured from sheet steel upwards at Kings Coughton, where the factory turns out 1000 units per year.

The site has expanded over the years and now totals 65,000sq ft with a new 17,000 sq ft building added recently

“Most of our competitors simply assemble machines, but keeping the entire production process in-house ensures both quality and a competitive price,” says Martin.

Ongoing investment is planned including a new steel storage area, laser cutter replacement, and a second shot blasting machine to keep pace with demand for painting, also offered as a service to other local engineering companies.

70 per cent of production is exported directly to countries as far afield as Russia and Fiji and Toro Australia distributes GreenMech chippers across the Australian continent.

Looking around the production hall, chippers can be seen in a range of colours, not just for export markets, but also to match UK customers’ corporate identities.

To assist manufacturing and servicing, machines are also built in modules such as the engine and associated equipment, chassis and chipping unit. 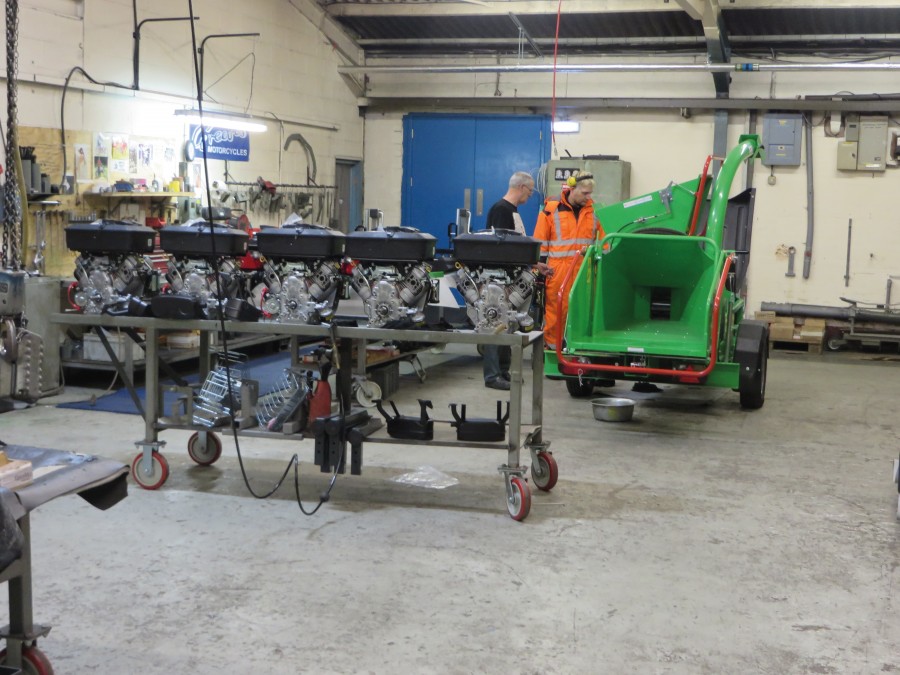 The dealer network is a vital part of the process, he comments. “We estimate that there are around 9000 GreenMech chippers in operation and we could not support them without distributors. This will become even more significant in the future as all Tier V compliant engines will be ‘plug ins’ (requiring laptop connection for servicing). Even petrol engines are becoming more complex and need specialist support.”

Ah yes, the ‘elephant in the room’ facing manufacturers of many types of landscaping machinery: emissions control legislation being introduced in 2019 which will require new machines above 26hp to be fitted with larger, more complex and more costly diesel engines.

“The main issue is that customers are not aware of the changes,” explains Martin.

“We have introduced a new petrol model, the Arborist 150P with a 37hp Briggs and Stratton Vanguard engine and this is £3000 cheaper than the diesel equivalent, but we continue to offer the 26hp diesel version because there is still the demand for it.” 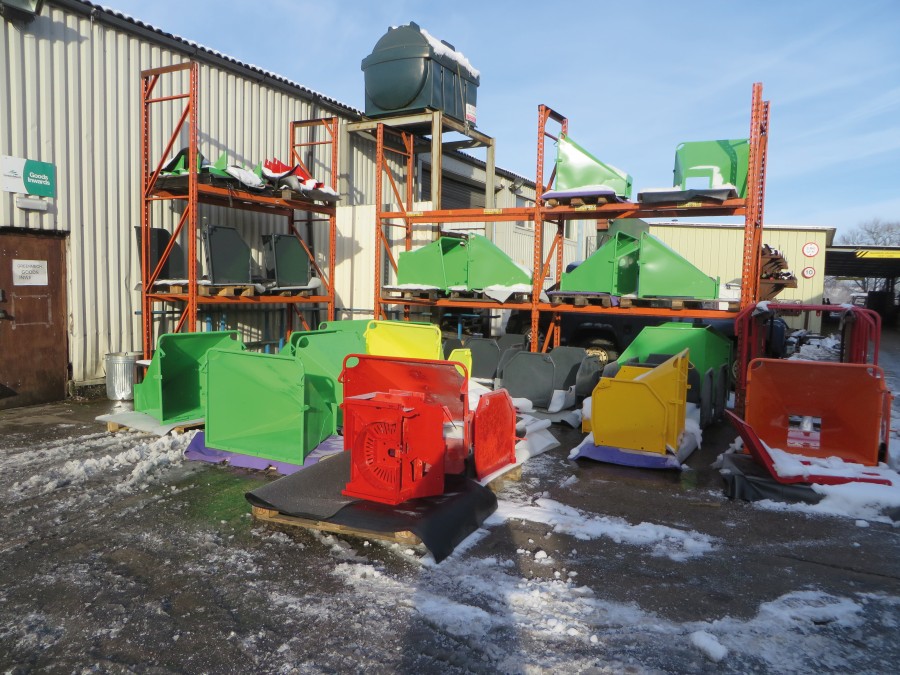 Post-2019, not only will diesels be more expensive – Martin suggests prices for diesel engines may double – but will also be physically larger to meet the emissions controls.

“It will be difficult to produce a sub-750kg diesel chipper above 26hp,” he comments.

“There’s no shortage of suitable petrol engines, including higher powered models – Kubota offers a 70hp unit, and they have always been popular in markets such as the USA. The demand is not there at the moment but our production process means that we could react quickly if there was a market for a 23cm petrol chipper for example.”

Compactness and light weight are essential requirements for a landscaper’s machine, and here GreenMech has scored with the CS100, a 100mm capacity gravity fed chipper that can fit through a garden gate and chip into a wheelie bin.

Innovation has been key to GreenMech’s emergence at the top end of the market. 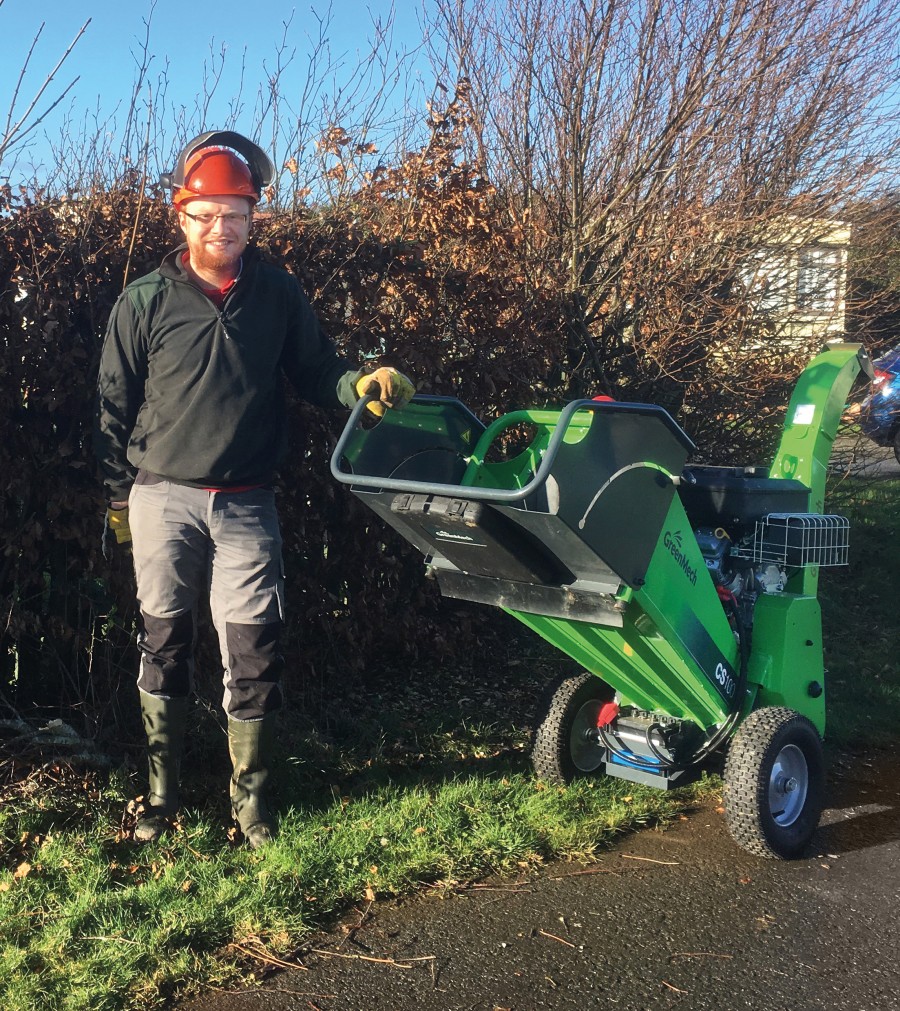 The patented DiscBlade is a circular blade design which has a working life of 900 hours, presenting three edges which can be interchanged as the blade wears, rather than two on a straight blade.

“The blade constantly self-cleans and contaminants such as wire are simply ejected round it,” explains Martin. “Its slicing action puts less stress on the bearings as it wears and it is also cheap to manufacture so we can pass the saving on to customers.”

Specifications vary widely in different markets, with France preferring conveyor fed machines, for example, which have to be built at a cost premium unpalatable to UK landscapers.

Shredders are also popular across the channel, but although GreenMech offers a ‘combi’ machine with separate chipping and shredding mechanisms, Martin suggests that for landscaping waste, green material will go through a chipper perfectly successfully if mixed in with woody material.

Alongside its main competitors, GreenMech works closely with the Health and Safety Executive to ensure that machines meet current and upcoming legislation.

“Noise is a major issue in the landscaping sector where contractors may be working alongside a hotel or hospital, so bystanders have to be considered as well as the operator, and our machines go through comprehensive tests to ensure that they are as quiet as possible, with the figures published in our brochures.”

The company also pioneered the Safetrak system for tracked chippers used in the challenging terrain faced by utilities and rail contractors. Track motors and units are mounted on independent telescopic legs to level the machine and increase ground clearance, allowing work across a 35deg slope.

“This design has proved extremely popular for its safety benefits – operators don’t need to drag wood waste down a bank to the chipper, but can process it where it is cut – and Network Rail has 200 Safetrak machines in operation.”

Even with such an extensive product range, GreenMech still has to develop bespoke solutions or adapt designs for local preferences and the offering is set to expand once again with new product launches at the 2018 APF show. The legacy of innovative design and quality engineering looks set to continue.