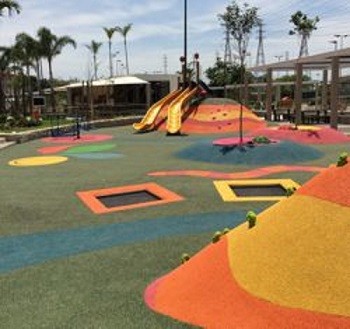 After almost three years in the pipeline, Playtop has been used to transform one of Brazil's aging playgrounds with brightly coloured, safer surfacing.

Oikotie is Playtop's overseas licensee for Brazil and their recent installation is the company's first sale of Playtop safer surfacing - and what a sale it was! Oikotie has installed 360m2 of Playtop surfacing at Madureira Park, which will form part of the 2016 Olympic park in Rio de Janeiro. The surfacing installed was primarily green Nike Grind blend but also incorporated yellow, green, orange, blue, red and pink.

The Oikotie team is clearly very passionate about the project and, like their passion, the project has scope to continue growing, with a further 3km of surfacing to be installed in the second stage of the venture. Oikotie went above and beyond the customer's expectations to make certain the park was show stopping.

Susana Ventura Rodrigues of Oikotie is very excited about the project: "Besides what was included in the contract, we did much more. We made three-dimensional animals and added extra graphics to make sure that everyone was happy: Our client is very happy, we are happy and the kids are happy – they are asking for more!"

The project has not only generated a great deal of media interest, but has also begun to alter the way local people perceive safe play in a market that is used to very traditional and dated play environments. Even in areas where the average real estate value is more expensive per square metre than New York, play spaces have suffered from neglect.

"This was our first sale in Brazil" adds Susana. "Brazilian playgrounds are stuck in the fifties and people don't give them any real importance. Well, this project has begun to change the way people think in Brazil.

"The transformation of the playground wasn't without its problems. The project took two weeks longer than anticipated due to delays from tropical rainstorms. "The build suffered from storms during the installation and then 50 degree temperatures that made our work very difficult. We ended up installing at night, from 5pm. to 5am to ensure the work was completed as quickly as possible".

The successful installation is already proving incredibly popular and hopefully marks the start of many more Playtop projects in Brazil.

Interest in stunning Playtop installation refuses to dry up

An interactive playground at Odense Harbour in Denmark is proving...
...Read More

A sunny day in the park!

There's really nothing better than a sunny day playing in the...
...Read More