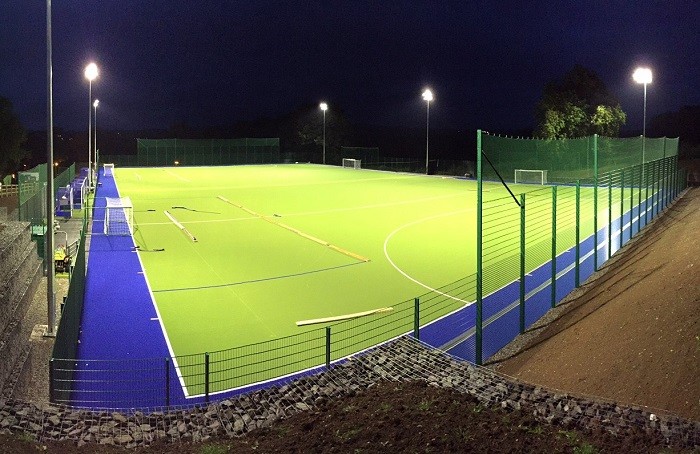 While countless schools around the country may already rely upon synthetic playing surfaces for year-round sport, one school in Staffordshire recently invested in its very first artificial grass pitch in a bid to enhance its hockey offering.

As a day and boarding school for 300 girls and boys aged 2-18, Abbotsholme School in Uttoxeter, Staffordshire has held a longstanding tradition of promoting maximum participation and providing a competitive sporting environment. While hockey may have historically been a popular sport amongst pupils, the limitations of a natural grass pitch had begun to restrict play.

"We've always relied on our natural grass pitch, but had reached a point where only one of our 12 matches a season would be played on it because other schools were so used to playing on an artificial surface," says Richard Mayfield, Head of Operations. "We consider ourselves a very outdoor-oriented school, but with that comes the challenge of maximising play during adverse weather conditions. Our sports pitches would often flood, which was another challenge we felt we needed to overcome."

With as many as 150 girls playing hockey every week, staff at Abbotsholme were also keen to find a way to encourage more boys to take up the sport – particularly after realising the limited appeal of natural grass pitches.

Having decided to explore the potential for a brand new artificial hockey pitch, the school contacted Agripower, one of the UK''s leading natural and artificial sports surface specialists, and compared a dozen turf samples in a bid to find the most suitable.

The school opted for TigerTurf's Evo Pro artificial grass – a versatile and durable sand-dressed surface which meets FIH National standards and is established as the UK's number one choice amongst education and community facilities. Not only that, but as one of the world's most widely-accredited multi-sport playing surfaces, Evo Pro would also help the school to offer other sports and activities – such as football and Quicksticks hockey for four- and five-year-olds.

With the new pitch set to be installed at the heart of Abbotsholme's 140 acre school campus, Agripower were required to remove several large mature trees, strip the area of its topsoil and permanently redirect electric, water, fibre optic and telecommunication supplies away from the construction site while the school was still open, in order to ensure all work could be finalised by the time pupils returned for the summer term.

"The site was particularly challenging owing to the existing site topography, which required the need for extensive earthworks and retaining structures to "˜shoehorn' the pitch into a very confined site," commented Graham Longdin, Director of Agripower. "With a deep cutting of up to 6.5 meters and pitch corners as close as 3m to the exiting boundaries, we had to retain the cuttings to guarantee long term stability."

As well as installing a low-glare lighting system. Agripower also reconfigured the car park and provided new CCTV to both the car park and the new pitch, before using the existing topography to create an elevated spectator area. All of this came together, giving one of the best views and backdrops of any facility in the country.

"The difference the new pitch has made to our entire sports offering has been outstanding," concludes Richard Mayfield. "The increased take-up of hockey across the school has been remarkable, but most pleasing has been the number of year 10 to year 13 boys who have taken up the sport. As a school which prides itself on encouraging maximum participation, this in itself has made our investment worthwhile."

SISIS Osca is pitch perfect for the ‘Accies’