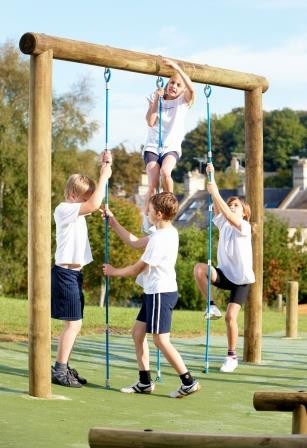 Playforce, the UK's leading playground and outdoor space provider, is celebrating a bumper 2015 followed by a successful first six months of 2016.

Highlights include providing possibly the largest number of Primary Spaces play areas across the UK and significant growth across their market-leading ranges and services.

Following their acquisition by TCL Group in 2015, Playforce, the UK's leading playground and outdoor space provider, has reason to celebrate. The first part of 2016 has brought significant and marked growth and success for this Melksham-based organisation.

The team is particularly proud to have been commissioned, by Sport England, to provide 108 of approximately 600 Primary Spaces Programme play areas across the UK. National Field Sales Manager, Chris Brady said: "Playforce has always supported schools in getting the very best from Government initiatives to encourage outdoor learning and play. Much of our success, over the years, has grown from the strong relationships our team-members have with head teachers, business managers and teaching staff. We're delighted to have been able to play such a significant role in promoting the Primary Spaces Programme and in getting more children outdoors and active".

Building on this strong reputation for customer care (according to recent Net Promotor research Playforce was ranked the supplier most likely to be recommended in the sector) Playforce has also launched a number of new initiatives and incentives, including funding support, a bespoke recommendation and referral scheme and partnerships with Twinkl resources and Sport for Schools. The company has also launched a new interactive playground design app, to help schools visualise their new playground in consultation meetings.

Known for its innovative design and attention to detail, Playforce has added more new products to their portfolio in the last twelve months than any preceding twelve-month period. And it doesn't stop there with an announcement of an exciting new range to follow later this year.

As a part of the TCL Group, Playforce has not only been able to widen services provided to schools and nurseries (to include landscaping, grounds maintenance and more) but also include development of closer supplier relationships. The two most recent include exclusive supply relationships with play equipment manufacturers Sik Holtz and Vinci Play.

This exciting period of growth, collaboration and development has been borne out by Playforce's annual statement and report. Head of Inside Sales & Marketing, Emily Northin said: "2015 was our most successful ever in terms of sales – and this success meant that the whole team started 2016 in "˜super-charge' mode. So far, in the first six months of 2016, we have issued 15% more quotations and attended almost 25% more consultations than the same period in 2015".

She continued: "We've expanded our activity in Scotland, Northern Ireland and overseas, launched new services for the Leisure and Local Authority sectors and increased our group headcount by more than 30 people. Best of all we've become approved suppliers for the three largest nursery chains in the UK as well as a number of the UKs leading Multi-Academy Trusts and pub/hotel chains.

"We haven't done anything complicated to lead to this stellar 2016, so far. We've simply put our customers first – whether that's meant identifying cost savings, supporting with funding and other Government initiatives, rewarding their loyalty or working hard on ways to expand our ranges. We're thrilled to have had such a positive start to 2016 and look forward to the coming months."

Pittville Park in Cheltenham is one of the largest projects eibe...
...Read More