Proludic provide 2017's city of culture with a medieval fortress 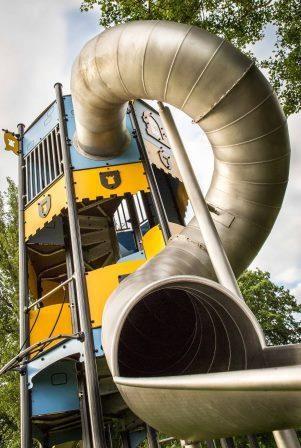 On July 1 Proludic had the pleasure of attending and helping out at the site opening of West Park in Hull.

Hull City Council had embarked on a 1.2 million pound makeover which included a new play area. The refurbished park was christened "˜Kids Kingdom' after pupils at Chiltern Primary School won a competition to name it.

The play area, which also features a paddling pool, was opened by Hull West and Hessle MP Alan Johnson and local ward councillors, together with competition winning pupils from Chiltern Primary School. Hull FC owner Adam Pearson and team legend Johnny Whitely were also in attendance at the opening.

Proludic provided the main focal point of the area which was a medieval themed multi-play activity tower which stands at an impressive 7.24 metres.

Tapping into how Hull will be the city of culture for 2017, the tower aims to take children back to the wonderful world of knights and princesses. It is so big that adults can also join in the fun.

Councillor Lynn Petrini said "I am so happy to see we have finally got it done. Hopefully we will see many happy families there. We wanted to make sure it would be ready for the six weeks' holiday. It is so nice to see it."

Alice Holt is a Forestry Commission site based in Farnham,...
...Read More

After the success of the Tree Fu Tom play area in Alton Towers'...
...Read More