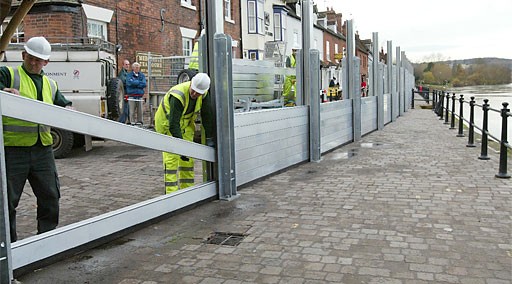 More than 64,000 more homes will be better protected from the devastating effects of flooding after 93 new flood defences were given the green light to start construction this year.

For the first time ever, the Government has provided additional funding for projects that will unlock economic growth. For example:

"¢ Exeter's new flood defences will create over 1,000 jobs and protect businesses which employ 4,700 people. They will provide better protection of land for business development as well as major rail and sewerage infrastructure and over 2,000 homes.

"¢ A tidal barrier in Ipswich will improve flood protection to ten hectares of development land attracting more business to the area and creating 4,000 jobs.

Environment Secretary Owen Paterson said: "The 93 schemes given the green light today will bring huge relief to tens of thousands of homes and businesses that have lived with the fear of flood waters hitting their doors. They can get on with their daily lives and work knowing that there are well built defences.

"This is also a message to the business community. By building defences that will unlock the economic potential of once blighted land we are saying to them that it is safe to come and set up. This will create jobs and grow the economy so we can compete in the global race."

Chief Secretary to the Treasury Danny Alexander, said: "The Government is getting on with building better flood defences across the country. We're protecting another 165,000 homes by 2015, providing security for homeowners and businesses alike.

"Extra funding that we announced at Autumn Statement to boost growth is already being allocated to areas where flood defences will unlock new development and job opportunities, creating a stronger economy and a fairer society."

The flood defence schemes announced today bring the total of partnership funding contributions to £148 million.  These contributions, from local councils, businesses and private investors, are in addition to the Government's investment.  The increase in external investment has been made possible by the partnership funding model introduced by Defra in 2011 to allow more schemes to go ahead.

Environment Secretary Owen Paterson continued: "Our partnership funding approach is a clear success, bringing in £148 million on top of our £2.3 billion investment so that more flood defences can be built. We now expect to protect 165,000 homes and businesses from flooding by 2015, exceeding our previous goal by 20,000."

This year, partnership funded projects include:

"¢ A £50.5 million scheme in Leeds that will protect 495 businesses and create over 18,000 jobs. Leeds City Council is contributing £10 million towards the cost of the scheme, with a further £5 million proposed to be raised from local businesses.

"¢ New sea defences at Anchorsholme in Lancashire that will reduce the risk of flooding to 6,000 homes and highway, tramway and sewerage infrastructure. Blackpool Borough Council has contributed £4 million toward the total cost of £28.4 million.

"¢ The £9.7 million Skipton scheme in North Yorkshire will reduce flooding to over 350 residential and 165 business properties in the market town.  £2 million of the project cost has been brought forward by local businesses.

The partnership funding approach targets Government support towards the most at-risk and deprived communities and gives local people greater choice about levels of local flood protection.

In the past, communities held out for full Government funding when there was little or no prospect of it being available. The partnership funding model clarifies what level of investment communities can expect from the taxpayer so that they can find cost savings or secure funding from other sources to allow schemes to go ahead.

Lord Smith, Chairman of the Environment Agency, said: "Our priority is to do as much as we can with every pound of funding and the new partnership funding approach is bringing in new money to allow flood defences to go ahead that would have been unaffordable in the past. We now expect to improve protection for 165,000 properties by 2015.

"With one in six homes in England at risk of flooding, we would also encourage people to take their own steps to prepare for flooding, for example by signing up to the Environment Agency's free flood warning service."

Further examples of flood defences given the go ahead today are:

"¢ £14.5 million flood defences at Grimsby Docks in Lincolnshire, which will better protect over 14,000 homes and businesses;

"¢ A £10.8 million scheme on the east bank of the River Arun at Littlehampton in West Sussex, protecting the town and 750 homes.

"¢ A £28.6 million sea defence to protect over 2,000 homes in Great Yarmouth As well as the flood schemes that will progress as result of this year's funding, the allocation for 2013/14 covers maintenance of existing defences.

The Environment Agency has committed to increasing the number of people receiving free flood warnings to over 1.1 million households by 2015.

The Government is on course to spend £2.3 billion to prevent flooding and coastal erosion over the four years to 2015.

This stunning public space is part of the Leeds Playhouse and...
...Read More