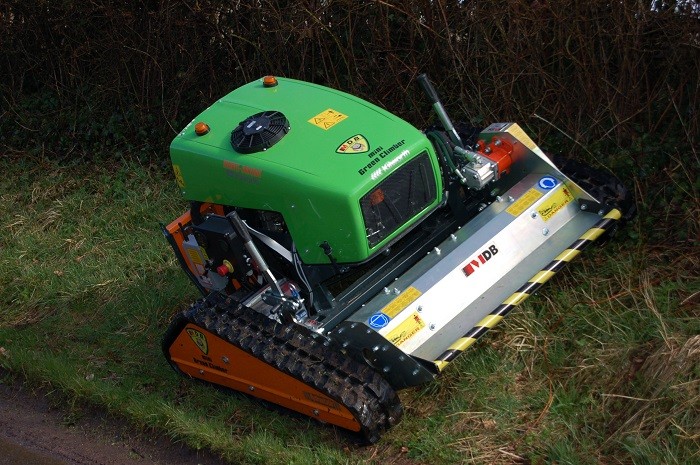 Kilworth Machinery are the sole UK importers of the MDB range of remote controlled mowers.

MDB of Italy have had many years' experience in remote controlled machinery for commercial and military applications and have now transferred this expertise into the ground care market.

After successful testing in the UK two models were initially introduced, the Green Climber LV and the Mini Green Climber. Both are designed to operate in areas that would be hazardous to an operator walking behind or sitting on a mower.

The Green Climber is available in 40HP (LV400) and 50HP (LV500) versions with Yanmar 3 & 4 cylinder diesel engines providing the power. The engines have been specially developed for working on slopes and allow the Green Climber to operate safely on slopes up to 60 degrees in any direction. Stability is ensured by rubber tracks which are hydraulically extendable in width from 1300mm to 1700mm.

Engine cooling is by means of a self cleaning "CleanFix" reversible fan system that automatically keeps the radiator and grill clear to prevent overheating.

A 1.3m cut flail mower is fitted as standard. The mower is designed and built for constant use in harsh environments and has 400mm of hydraulic side shift to assist with cutting up close to trees and fencing.

The flail mower is easily removed and other attachments including trencher, snow blower, snow plough, sweeper and hedge cutter can be mounted on the Green Climber.

The Mini Green Climber is similar in principle to the standard Green Climber but is lighter and more compact. It is powered by a 25HP twin cylinder air cooled diesel engine. The flail mower is 1.0m working width and sits between the rubber tracks to give a total width of 1500mm. In order to maintain the same 60 degree bank capabilities as the larger machine, the engine on the Mini Green Climber is self levelling.

All Green Climbers are radio controlled by a robust and ergonomic hand held unit with joystick and push button control of all functions. Radio control range is 300m with automatic shut down outside this range.

For the 2016 season, two new models have been introduced. The LV300 fills the gap between the mini green climber and the LV400. It has a 29HP diesel engine and adjustable  tracks extendable from 1.15m to 1.55m width.

The LV600 is the new flagship model, based on the LV500, with 56HP high torque engine and extra heavy duty track units.

Fields in Trust pays tribute to HRH Duke of Edinburgh

Fields in Trust are deeply saddened to learn of the passing of...
...Read More