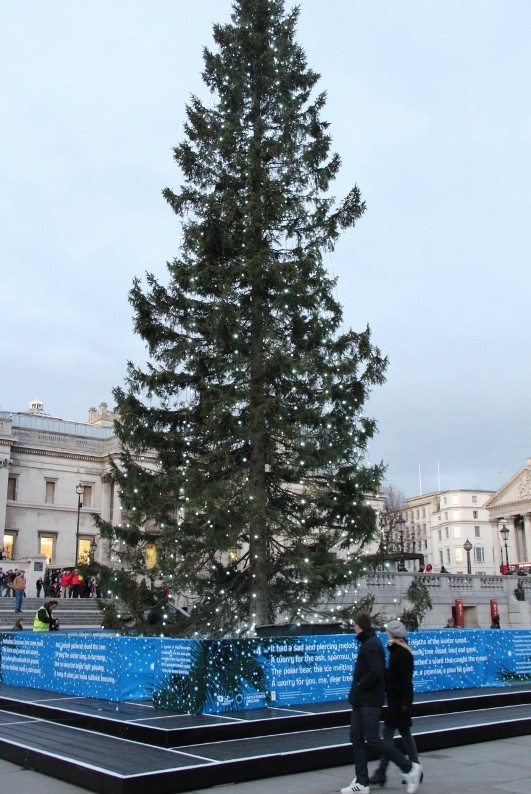 London's festive season has kicked off in sustainable style with the lighting of the iconic Trafalgar Square Christmas Tree.

The traditional annual gift from Norway to the UK will be the 66th in the series of trees donated by Oslo to London and is symbolic of the good relations that exist between both nations.

This year's Christmas tree is 21m high and approximately 115 years old and was felled during a special ceremony on 23rd November, attended by the Mayor of Oslo, Fabian Stang, the Mayor of Westminster, Angela Harvey and UK Ambassador to Norway Jane Owen. Pupils from the International School in Oslo, St. Paul's Primary School in London and Lutvann School were also on hand to get the Christmas spirit started by singing Carols before the tree was carefully cut and lifted by crane to begin its journey to London.

Both Fabian Stang and Angela Harvey spoke about the importance of this tradition as a symbol of the close friendship that was created between the British and Norwegians during World War II. Formally accepting the tree, Angela Harvey spoke of the gift as: "a warm and a moving example of how positive traditions can emerge from the most tragic situations."

The Norwegian Spruce has been harvested from a PEFC-certified forest from the Ostmarka area just outside Oslo. Jon Christiansen, head of the forest owned by the city of Oslo, said that they have prepared this tree for a long time to be sent to London. "The trees that are selected as potential gifts get extra care and treatment every summer," said Jon. "They get extra space around them so they get a lot of light and can grow free from competition from other trees. They are also fertilised and cared for so that they will have many regular branches and become dense and fine and look good as Christmas trees."

Westminster Mayor Angela Harvey stressed the importance of the Christmas tree coming from a sustainably managed forest, saying: "British people are generally very concerned that everything we do must be sustainable, and we're pleased that this great gift comes from a forest managed according to sustainable principles. The international forestry standard PEFC is an important contribution to an environmentally friendly forestry, and I am glad that Norwegians are as concerned about this as us."

Mayor of Oslo, Fabian Stang, added: "My father was a forester and I am therefore a natural supporter of us to engage in an active but sustainable forestry both in Oslo and in Norway. In Oslo's forests it is important that we take into account biodiversity and outdoor recreation and hiking areas while we also conduct active forestry."

For many Londoners the Christmas tree and carol singing in Trafalgar Square signal the countdown to Christmas.

The tree will remain in Trafalgar Square until just before the Twelfth Night of Christmas, when it is taken down and recycled, being chipped and composted for mulch.

The Turfgrass Growers Association are pleased to announce that...
...Read More