Pressure mounts on Westminster to invest in a Summer of Play

Scotland’s ministers have already pledged a £60m play fund and today the Irish government has announced the roll out of a Summer of Play initiative with €6m in funding for outdoor play. Calls are growing louder for Westminster to follow suit.

Chair of the Association of Play Industries, Mark Hardy, says: “The number of playgrounds has been in decline for many years, with hundreds of playgrounds closed or allowed to fall into disrepair. Local Authorities have been starved of central funding and, faced with competing priorities, have been forced to close vital play facilities. 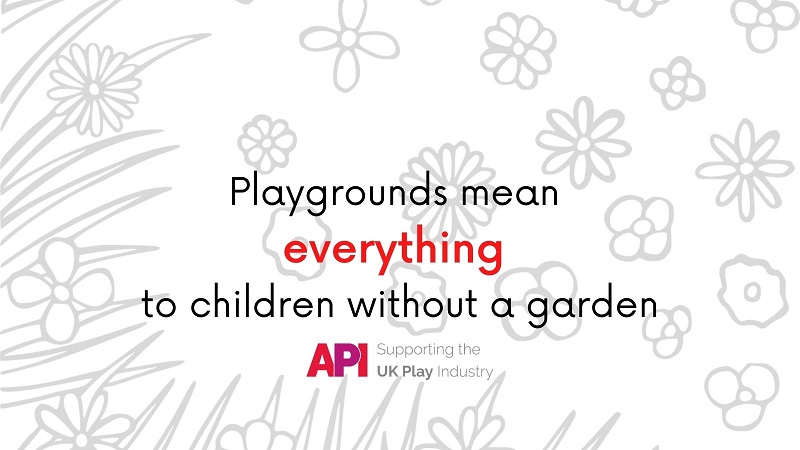 “Children are facing a mental and physical health crisis, hugely exacerbated by lockdown, and without local, high-quality playgrounds many face a bleak future. Children in the most disadvantaged areas are the hardest hit and the 1 in 8 UK households without a garden.

“When it comes to children’s wellbeing and development, play is the most important factor. Without outdoor play, children cannot develop the mental, social, emotional and physical skills they need.

“Playgrounds are the number one place for children to play outdoors, away from the home. If the number of playgrounds continues to decline at the current rate, millions of children could be left with nowhere to play. It is a silent catastrophe, the consequences of which will be felt for generations.”

The Association of Play Industries has joined with other leading children’s organisations and experts to call for a Summer of Play to address the serious harms caused by lockdown on children’s health and wellbeing.

“A central and ring-fenced fund is urgently needed to provide a sustainable network of free-to-use public play provision,” says Mark. “In relative terms, the investment needed is a drop in the ocean but would have a deep and lasting impact on this generation of children.

“We are urging Boris Johnson and the Minister for Housing, Communities & Local Government, Robert Jenrick, to seize this opportunity and provide enough funding for every child to be able to play freely and safely outdoors in public playgrounds.”

The Green-tech team are once again hitting the road to visit...
...Read More