Record-breaking 2,127 parks and green spaces to fly the flag across the UK

A total of 2,127 parks and green spaces have collected a coveted Green Flag Award for 2021 as the scheme celebrates 25 years as the international quality mark for parks.

After 18 months that have seen green spaces become lockdown lifelines, playing a vital role for people across the country as places to relax, exercise and meet friends and family safely, the news that a record number have achieved the Green Flag Award standard is testament to the hard work and dedication of those tasked with looking after these national assets.

As the scheme marks its Silver Jubilee, four of the seven parks that received their first Green Flag Award when the scheme was launched in 1996 and have flown it every year since – Worden Park in Lancashire, Cockington Country Park in Torbay and Queen’s Park and Highgate Wood in London - will be raising their flags again today. 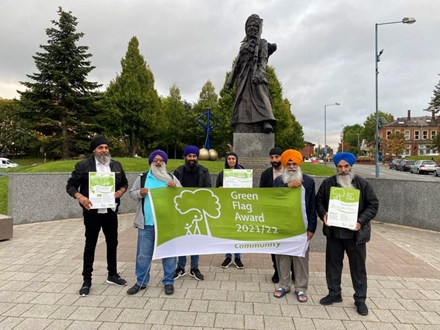 They are joined by parks and green spaces as diverse as the National Memorial Arboretum in Staffordshire, Scottish Power Renewables Whitelee Windfarm, Belfast Botanic Gardens and Bwlch Nant yr Arian in Ceredigion.

Green Flag Award Scheme Manager Paul Todd said: “I would like to congratulate everyone involved in the 2127 parks and green spaces on their achievement.

“To meet the requirements demanded by the scheme is testament to the hard work of the staff and volunteers who do so much to ensure that their site has high standards of horticulture, safety and environmental management and is a place that supports people to live healthy lives.”

In celebration of this year’s announcement the scheme is asking parks, buildings and monuments around the UK to #GoGreenForParks today to show appreciation for the spaces that mean so much to people. Landmarks including Alexandra Palace and Bradford Town Hall will be ‘going green’ tonight.

Perennial, the charity for people working in, or retired from,...
...Read More