The Association of Play Industries (API) has been highlighting the concerning decline in public play provision for some time.

The API’s recent #PlayMustStay campaign showed a 44% decrease in spend on public play areas since 2017 and an accompanying survey confirmed that the public were equally concerned at the effects of this reduction.

In particular the shift from outdoor play to a more sedentary childhood indoors was considered not only a physical impact but also a mental health concern.

With lockdown exacerbating this problem the API wrote to Government ministers urging them to tell the public when play areas could re-open and asking them to provide a specific funding stream for outdoor play and fitness facilities. 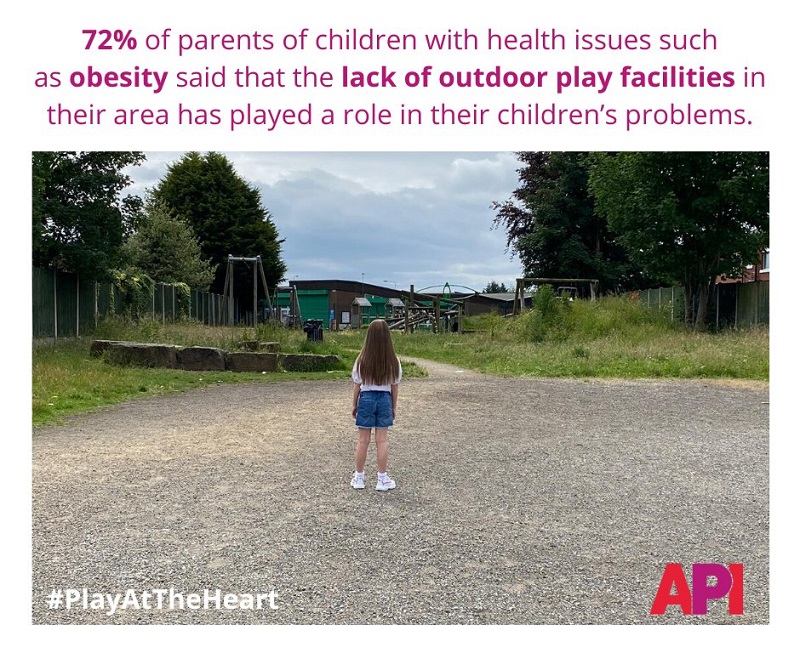 The API was encouraged when children were allowed back in to play areas on 4th July but the response from government on funding has been less than supportive. The Government response has been that they feel funding they have provided to Local Authorities is sufficient for them to determine the best local provision, but this contrasts sharply with what is actually happening.

Local Authorities are under even more significant budgetary pressure and are in the unenviable position of prioritising their available funds. Are fixing potholes for example more important than public play areas?

If play areas continue to disappear the impacts on society will result in more physical and mental health issues emerging, the cost to society will be significant. Billions of pounds have been committed by the Government during the COVID crisis to support the economy and yet the amount required to reverse the decline in public play provision and have a positive impact on health and mental well-being is minimal.

API Chair Mark Hardy says:“Children have got out of the habit of being active during lockdown, physical activity is vitally important to our society.

“Active children become active adults and without a fit and healthy society we are less able to cope with future virus’s and of course the cost of obesity to the public purse is well understood. The relatively small cost of providing specific funding pales into insignificance compared to the health benefits.”

Hundreds of leisure facilities could close permanently or be...
...Read More

Put children at the heart of the recovery

More than 150 organisations, and counting, are calling on the...
...Read More