New upgrades for robotic range as demand continues to increase

Bomford Turner has updated its Flailbot range with the latest Tier IV final emissions-compliant Perkins engines, taking ouputs up from 40hp to 50hp and 70hp to 75hp.

A new 60hp model also joins the range as the company has taken the opportunity presented by engine upgrades to make other improvements including a quick attach headstock which uses just two locking pins to fit and remove the attachment.

A higher capacity fuel tank has also been specified for longer running time. 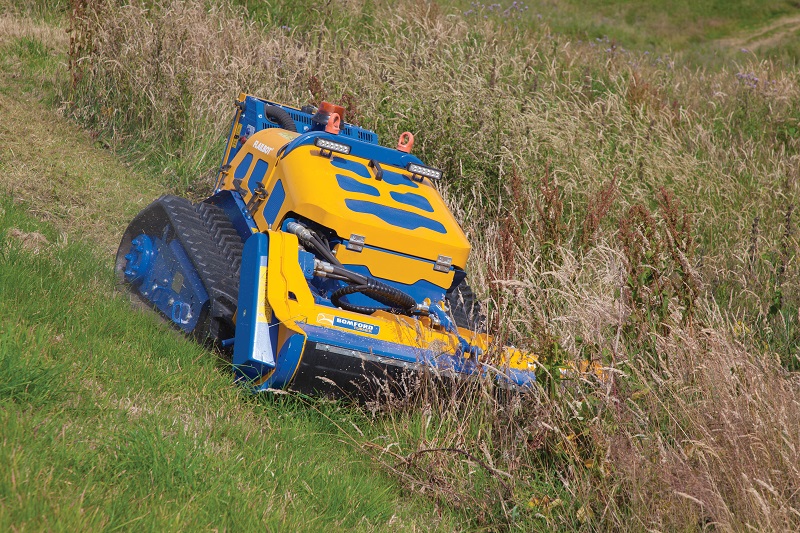 A change of engine supplier from B&S to Honda means that the petrol Flailbot Mini is now 25hp.

All Flailbot models have an extending track base for added stability and an auto tensioning track system, plus a remote control power unit.

Bomford Turner reports demand for diverse applications and thus attachments for the Flailbot, from a power harrow and seeder used by a local authority to renovate a roundabout in safety, to a set of folding Joskin grass harrows.

Bomford is reporting increased demand for cutterbar mowers rather than flails for work in SSSI land management as it is gentler on delicate plants and the cut material can be removed.

Mulching heads remain the main attachment sold, often for work on steep slopes, and offering a more selective approach to tackling invasive species, or for work where access is an issue.

ClearWater was a hit at a very successful BTME for Acumen Waste...
...Read More