Charcon, the hard landscaping division of Aggregate Industries, has stated that improving “road safety must be a priority” if the UK wants to encourage more people to carry on walking and cycling, as they have done in recent months.

It comes as transport secretary Grant Shapps announced in May a £2bn package to help increase cycling and walking capacity across the UK amid unprecedented levels seen during the coronavirus lockdown. In some places, there’s been a 70% rise in the number of people on bikes - for exercise, or for safe, socially distanced travel1.

Pop-up bike lanes with protected space for cycling, wider pavements, safer junctions, and cycle and bus-only corridors will be created in England within weeks as part of a £250 million emergency active travel fund - the first stage of a £2 billion investment, as part of the £5 billion in new funding announced for cycling and buses in February. 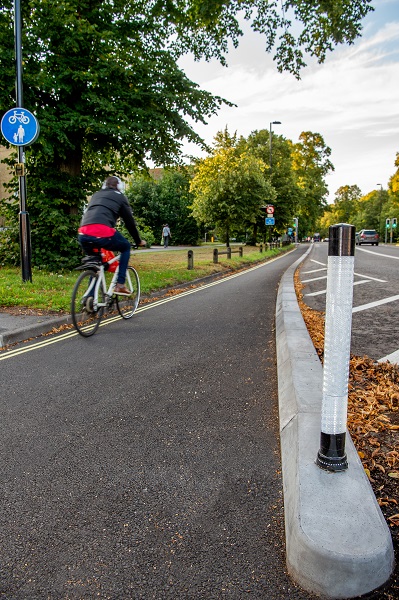 With this in mind, Charcon, which has worked on some of the UK’s most high-profile walking and cycling schemes including in London, Birmingham and Leeds, revealed that addressing road safety concerns will be key to keeping the public on their bikes.

Mark Barter, Sales Director at Aggregate Industries, said: “While it’s heartening to hear that during the pandemic millions of people have taken up cycling or walking – the reality is that the absence of road traffic has no doubt helped many to feel safe enough to get on their bikes.

“As we emerge from the lockdown, the government recognises that this is a once in a lifetime opportunity to achieve lasting change to the nation’s travel habits. However, it will mean ensuring people still feel confident and safe enough to view walking and cycling as a viable alternative to getting in the car for short journeys.

“While the government’s recent £2bn pledge is a welcome boost for creating local walking and cycling networks across the country, successful execution will depend on having a clear strategy in place to tackle road dangers, and based on high design and construction standards, including correct lane segregation and colour demarcation.”

According to Charcon, which has seen a rise in enquiries for its cycle kerb solutions since the announcement, one of the most requested design elements to emerge in recent years are Dutch-style cycle kerbs. Designed to make it safer and easier for vehicles to cross over a cycle lane or footpath when travelling from a main road into a side street.

Mark adds: “Based on the increased level of enquiries we’ve had since the government announcement – from new and existing customers – it’s clear that creating a safe and well-designed cycling network is an urgent priority.

“And with the Netherlands having the highest rates of cycling in Europe, naturally, the country’s excellent cycling network is driving rising demand for Dutch-style kerbs in the UK. Responding to this, we’ve recently launched our new Dutch Entrance Kerb entrance block – a game-changing solution designed to keep footways and cycle tracks at a constant level so that it’s easier and safer for people to travel on foot and by bicycle in the urban environment. Going forward, design elements such as this will be key to building a world-class cycling infrastructure.”

With extensive experience of working with local authorities, Charcon Hard Landscaping offers over 24 varieties of cycle kerb solutions available, from segregation units to demarcation kerbs – all made from up to 65% recycled content – often providing bespoke options in line with specific scheme requirements.

The British Association of Landscape Industries (BALI) has...
...Read More

There has always been something quite peaceful and magical about...
...Read More